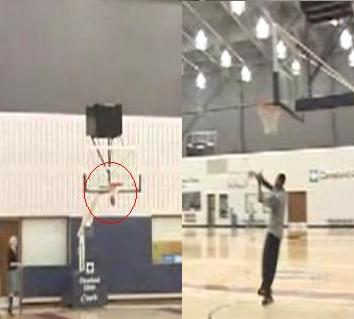 The coolest part about this video may not actually be LeBron’s shot, it may be the fact that the entire team took part in a touch football game after practice.  I would love to see guys like Shaq and LeBron play football.  We all know LeBron thinks he could start right now for the Cleveland Browns at wide receiver, and who is going to argue with him?

That being said, LeBron’s shot is pretty amazing.  He lines up under the opposite basket and just heaves the football the full length of the court and it goes in.  Nothing but net.  The guy is unreal.  Its hard to believe that there is anything athletic that he couldn’t pull off.  It just seems like he isn’t even trying as the football sails in a perfect spiral through the hoop.

Although the clip doesn’t show the entire football game, Shaq’s goofy “fooling no one” no-look pass is pretty funny to watch as well.  LeBron may be the headliner, but Shaq will always be in the spotlight with his ridiculous behavior.  While LeBron could be headed for New York, everyone in Cleveland should tune in and enjoy the show while it lasts.