Reindeer Dunked On By The MVPuppets: LeBron, Kobe, Santa 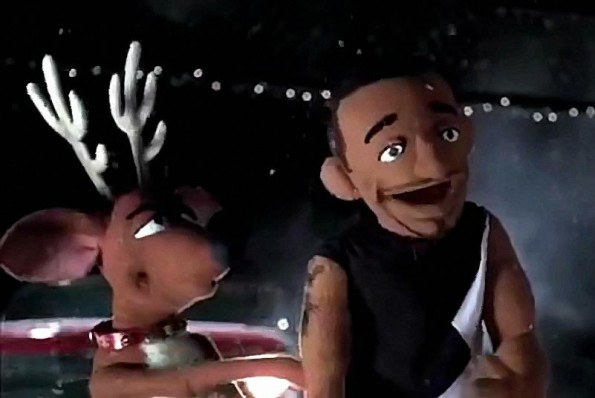 The Nike puppets of LeBron James and Kobe Bryant are sometimes funny, sometimes lame, and mostly just strange.  The recent “mystery of the missing shoe” one had a funny moment or two but kind of fell flat.  This new commercial/music video falls mostly into the strange category, but also will make you laugh a bit.  Especially if you are strangely entertained by LeBron dunking on a reindeer.

All that being said this commercial is pretty funny.  It starts out with a crazy rap battle between Santa Claus and his reindeer Blitzen.  Santa’s voiced by KRS-One and Blitzen is voiced by Lupe Fiasco.  The rapping is actually really good and pretty funny.  The plot of the video is that Santa gets a call from Blitzen talking trash about some sort of basketball game between Santa, Kobe, LeBron vs. some reindeer.  Santa rolls up with his “crew” and they dominate the reindeer in the pickup playground game.  Then it ends with LeBron dunking on the reindeer and repeating over and over “dunking on a reindeer, d-d-dunkin’ on a reindeer”.  LeBron does always seem to want to dunk on non-NBA players, doesn’t he?

These puppet commercials have ranged from funny to awful to just plain uncomfortable, but I really think this one is funny.  Not to say it really makes an sense, but it is the first one I really laughed out loud at.  Keep ’em coming Nike.