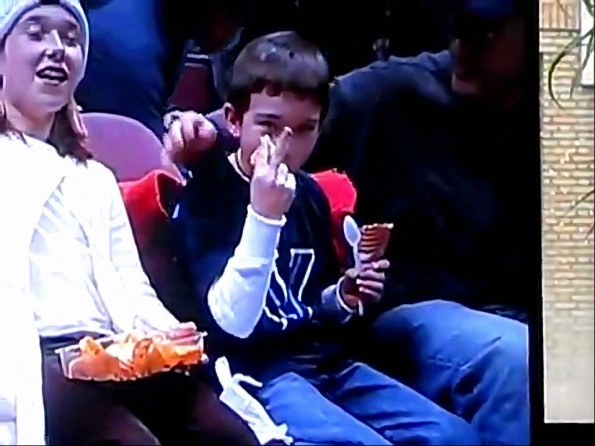 Philadelphia fans are known for their pleasant attitudes and positive sober behavior…I can’t even write that with a straight face.  Philly fans are the most negative, obnoxious, drunk bunch of idiots that I have ever seen.  Now that is an unfair generalization about all of them individually, but in terms of the character of the group it is pretty spot on.  Last night’s Villanova game did nothing to change that impression.

A father and his three kids were at the Nova game last night, enjoying their Wildcats play basketball.  All three kids had giant ice cream cones, so naturally the broadcast went to one of those “look at the cute kids eating ice cream” shots.  There was only one problem.  The cute kids were Philadelphia sports fans, and as such could only be counted on to provide some sort of vulgar behavior.

And vulgar behavior is what they got.  Now credit to the kid for being so passionate at such a young age, though its unclear what exactly he was passionate about at that stage in the game.  The kid randomly flicks off the camera for no apparent reason.  Is it fair to blame all Philly fans, or even his father, for this little stunt?  Absolutely, kids learn from their elders and I’m sure those kids have grown up hearing drunken profanity at every Philly sporting event ever, no matter the circumstances.

All that being said, that little kid is hilarious.