Cuba Gooding Jr. Strips on Ice; Gets Cake on His Face 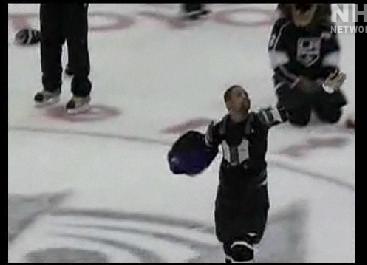 It’s easy to love Cuba Gooding Jr., and its also easy to love hockey.  I’m not sure if the two mix, however.  This video helped to confirm that sentiment, although it did make me laugh and was way more encouraging than those fans beating the hell out of each other for a hockey stick.  Following the Kings 2-1 victory over the Capitals at the Staples Center on Saturday night, a charity event was held that included Cuba Gooding Jr. and other celebrities participating in a hockey game.  The event was called the First Annual Face-Off for Hope and benefited the City of Hope Hospital.

Anyways, after the game Cuba Gooding Jr. was called out onto the ice to celebrate his 42nd birthday.  He had a hat trick which helped his team to a 7-5 win.  For some odd reason, however, Cuba decided to do a weird “Slap Shot”-esque strip tease on the ice when going to receive his birthday cake.  It was pretty uncomfortable for all parties involved, but funny nonetheless.

The interview afterwards is priceless as well.  With the cake all over his face, he answers some of the questions the announcer asks him.  His best line of the night, however, was when he was asked what was more important to him, winning an Oscar or scoring a goal on the Staples Center Ice.  His answer? “Scoring a goal at STAPLES Center is the best thing that’s happened to me.”