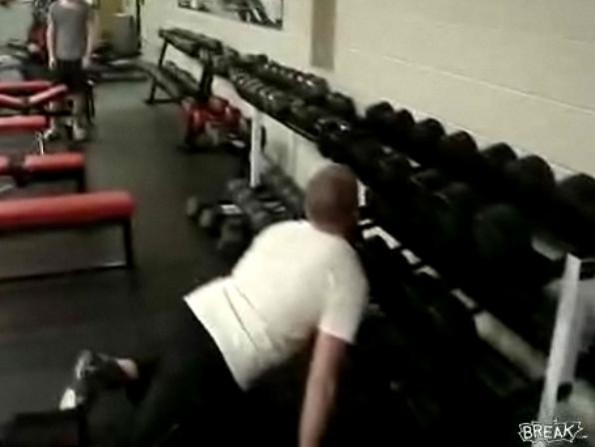 Ever wonder why personal trainers will always tell you that the most important thing to remember while working out is to breathe?  This guy found out the hard way!

It was just another day at the gym.  Or at least that’s what it seemed like, but after building up some courage this man decided to attempt a 329 pound deadlift and figured it would also be a good idea to get it on video.  You know, in case the chicks don’t believe him when he is out at the bar showing off his pipes.

Well now he will have a nice bruise on his head as additional proof.  After completing one lift, the man drops the bar, releases a loud grunt, walks away, and suddenly faints, falling face first into a dumbbell rack.

One thing is for sure.  He is no Chris Morgan.

Congrats dude.  You not only deadlifted 329 pounds, but you also made our list for dumbest workout accidents.  Unfortunately, it will take a lot more than this to overthrow the man who decided to use a dumbell bar as a penis enlargement tool for top spot on the list.

Check Out Our Friends Great Stories