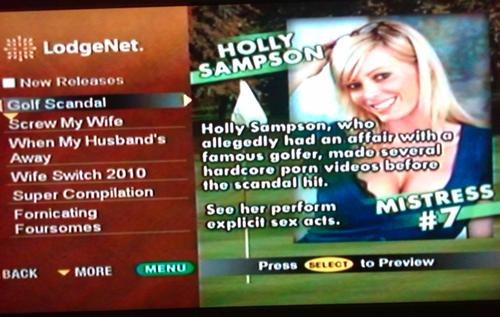 Hotels have some interesting television for traveling businessmen (and others of course).  While the usual lineup of channels and movies are available, there is always the option for some wonderful adult films.  Lodgenet, which provides the media for a lot of hotels around the country, is an opportunistic business venture just like anyone else.  And what better time for the adult film industry to capitalize on Tiger Woods‘ misfortunes than now?

That is just what Lodgenet has done.  Their top option appears to be a special feature of Holly Sampson, identified on the screen as “Mistress #7” with allusions to her affair with Tiger Woods.  I’m sure that Lodgenet was very careful not to put Tiger’s actual name on their promotions, but it is pretty obvious that is what is being referenced.

If you remember back to 2009, Holly was the mistress that he allegedly slept with at his bachelor party (so technically it was not adultery yet…technically).  Unlike the others Holly is relatively attractive and we all remember her amazing little naked video interview where she revealed her sexcapade with Tiger.

I’m not going to lie right now, Lodgenet is on to something since I would definitely choose the Holly video over the others.  Not to say “Fornicating Foursomes” doesn’t appeal to me, but come on, we are talking about one of Tiger’s ladies.  The curiosity, coupled with the boredom of traveling on business, would kill me.