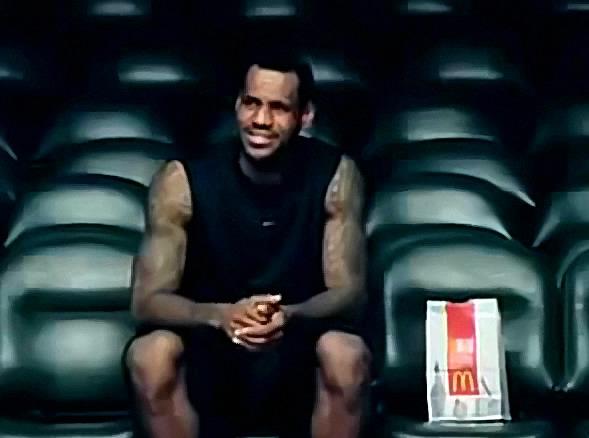 Back in the day, Larry Bird and Michael Jordan went head to head for a Big Mac and fries. The acts of chomping down on Micky D’s and playing sports are polar opposites, but who cares — the commercial was “nothin’ but net.” We never even find out who won because neither Air Jordan or Larry Legend missed. It’s better that way, kinda like Rocky and Apollo sparring at the end of Rocky 3. Charles Barkley even wondered if he could play one year later.

Flash Forward to 2010, over 15 years later. The update of the classic “Bird vs. Jordan” McDonald’s Super Bowl commercial features modern NBA superstars Dwight Howard and LeBron James. King James sits down with a bag of, you guessed it, Big Mac and fries while Howard is practicing. Dwight offers to play for it, and you know after Superman’s Orlando Magic beat Bron’s Cleveland Cavaliers in the playoffs last year that LBJ was down. Especially considering the way he dunks in practice.

Before things got started, the two agreed to “no jumpshots” per the request of Howard. That was a nice little bit of riffing off of Bird’s “no dunking” line in the original. After that, the dunk contest we wish we’d get to see at NBA All-Star Weekend went down. Flat-footed 540s. Quadruple pumps. Between-the-leg windmills. 360s from the free-throw line — with Olympic-style landings. Sure, a little CGI and some special effects tricks were used, but it was still awesome. One of the best commercials of the night hands down. Check it out…

Adam Best is the senior editor of the FanSided Sports Network. You can also find his work at FlickSided, a film and entertainment site.