Kid Takes Pane Of Glass To The Head At Blackhawks Game 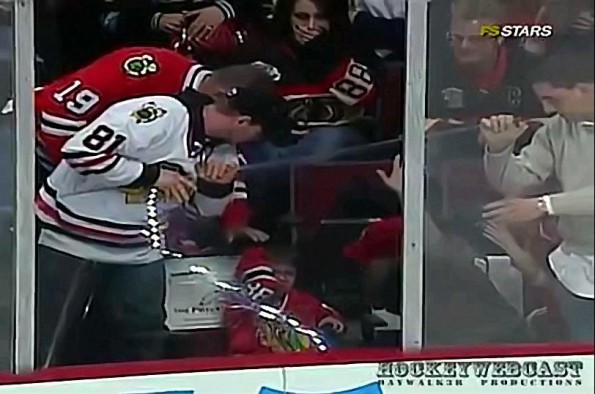 Sitting by the glass at a hockey game is not all fun and games.  Sure you may get the opportunity to exchange in a trash talking battle with an opposing player, or even signal to them their preference for oral sex.  But if you get too close to the glass, you may find yourself waking up with a bump on your head.

Fortunately for this kid, he did not lose consciousness, but he did receive a hard knock to the noggin’ after Jere Lehtinen was driven into the boards by Andrew Ladd at the United Center Tuesday night when the Chicago Blackhawks hosted the Dallas Stars.

Replays show the child taking a good thump, however, he appeared to be fine and even received a stick from Stars defenseman Trevor Daley as a kind gesture.  Thumbs up to the kid for sticking it out, and to Daley for his generosity and great sportsmanship.