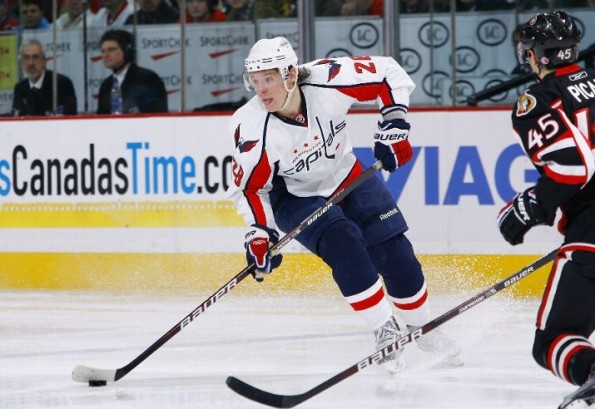 The Washington Capitals may finally be falling back to Earth after losing two consecutive games, but they certainly have not forgot how to put the puck in the net. Their current average of 3.93 goals per game is tops in the league, 0.7 more than the next best team.  After going through their first 58 games of the season without any player on their team recording a hat-trick, the Caps had produced two in a row with Alex Ovechkin and Brooks Laich each getting one against the Pittsburgh Penguins and Montreal Canadiens , respectively.

Last night in Ottawa, it was Alexander Semin‘s turn to get in on the hat-trick party.

The Caps may not have won the game, but that was no fault of Semin’s as he recorded three goals and added an assist in a 6-5 loss to the streaking Sens.  The Caps would see themselves go down by a couple of goals on a few occasions, but Semin’s laser of a wrist shot continuously brought them back into the game.  His hat-trick was the third in a row for a Caps player.  Unfortunately, it was not enough to get his team the victory on this night.

It can be tough to reward a “Stat Line of the Night” to a player on the losing team, but last night Alexander Semin’s performance made it an easy decision.