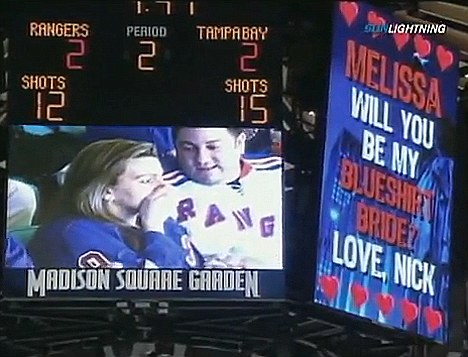 There’s typically a code of conduct when it comes to a wedding proposal.

Now, some guys might be under the assumption that because they just spent all of their life savings on a ring that they should be able to propose however the hell they want.  I think that’s relatively fair, but you have to think about it from the girl’s perspective.  She is going to be the one telling all her girlfriends that you two are engaged and then naturally, they are going to ask how you did it.  If you ask her while you’re taking a crap, that’s not exactly going to get the best reaction from her, or her friends if your girl miraculously says yes.  Frankly, you want to come out looking all sweet and romantic, even if you don’t believe in that crap.

One no-no when proposing to your girl that I’ve come to learn from asking my current fiance the dos-and-don’ts of proposals is that proposing at a sporting event is absolutely unacceptable unless she is drop dead crazy about sports herself.  Even then, sometimes girls just want to be girls and get their dream proposal — and I can assure you, getting proposed to at a sports game is not how she dreamed it up as a little girl.

Well, this guy at the Rangers game didn’t get that memo and he learned the hard way.  After pointing his girl to a video message asking her to marry him, she withdrew in shock, got up, and walked away while shaking her head “aw, hail no he didn’t.”

There are reports now that this was a Valentine’s Day hoax, but I don’t know if I believe it.  To me, that’s just a nice little way of helping that guy save some face.