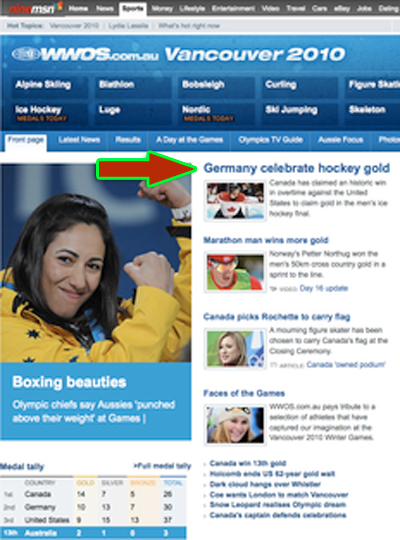 If you live in Australia, you may be thinking to yourself, “How the hell did those Germans end up winning the gold medal in hockey?”  And why would any Aussie think such a thing?  Because that is what Channel 9 in Australia is telling everyone in the land down under.

Although this erroneous website publication may not reek of racism, like that seen on NBCOlympics.com, it sure as hell was capable of causing mass confusion.  Fortunately the page has been updated, and credit was given where credit was due, but for a mere moment in history (at least in Australia) Germany was on top of the hockey world.  It is just too bad that they didn’t know it.

So if Germany won the gold medal in Men’s Hockey, what were all these crazy Canadians doing celebrating on the streets all night?  They must really like their Wienerschnitzels.