Back Flips Just The Latest Drill Added To The NFL Combine 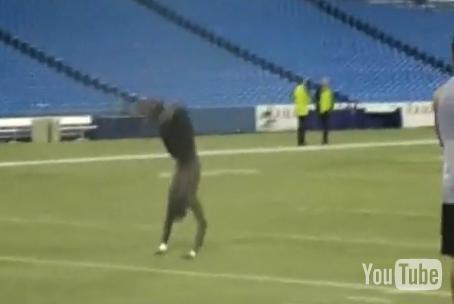 With the NFL season over, the NFL Network has likely taken a hit in their ratings.  After all, how many people out there can they expect to sit through their rather boring combine coverage?  Is anyone really interested in watching a bunch of college prospects run 40-meter dashes, take a shot at the bench press, and perform shuttle runs?  We didn’t think so.  However, both Jason Pierre-Paul and Kion Wilson from the University of South Florida have an idea to make things a little more interesting

The two provided us with a demonstration this week and upon first look I must admit, I was impressed.  Especially with Pierre-Paul’s grand total of 15 consecutive back flips.  Needless to say, he was a little dizzy following that showing.

So can this idea fly?  I don’t see why not.  After all, if scouts can find meaning behind all those other drills they put the prospects through, why can’t they do the same for back flips?  And while they are at it, why not also include some jumping-out-of-the-pool tests?

As for Pierre-Paul’s next opponent, may I suggest Keith Eloi?  He’s got the hops.  All he needs is the rotation.