Zamboni Takes A Dip In The Lake (Video) + (Pic) 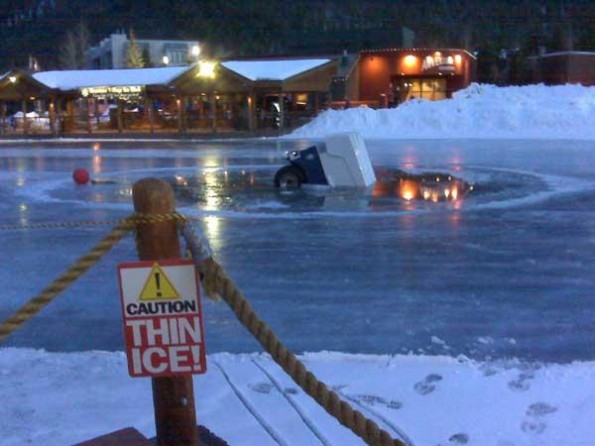 “Skating on thin ice” is most often used as an idiomatic expression, but at Keystone Resort in Colorado, that was literally the case for one unlucky zamboni.

Performing its regular maintenance to the largest groomed skating pond in North America on Tuesday night, the 7000-pound ice cleaner was too much for the ice to handle, causing the surface beneath it to crack.  With the cameras rolling, some visitors captured some great footage of the zamboni falling through the sheet of ice.

Skaters were removed from the skating surface, and the ice was expected to be examined before reopening.  As for the zamboni, staff had to wait until the following day to dig it out, however, it is believed that any damages will be reparable.

Oh, and we should probably mention the fact that no one was injured during the incident.  Not even the zamboni driver.  Another zamboni disaster averted!