This 3 Minute Hockey Fight Is Entertaining From Start To Finish 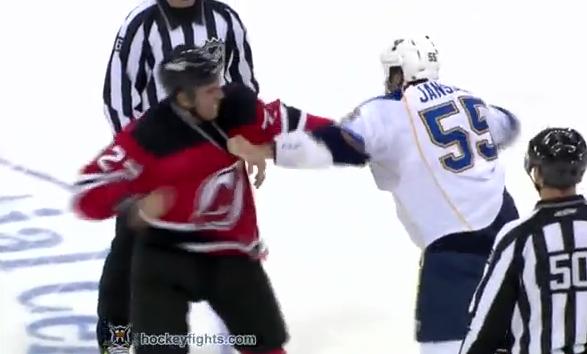 Fighting in hockey may not be for everyone, but for those who do enjoy seeing a couple of bare knuckle brawlers go at it on skates, we have just the clip for you.

Many fans will tell you that the most exciting part of a hockey fight is the one-punch knockout, but after seeing Cam Jansen of the St. Louis Blues and Pierre-Luc Letourneau-Leblond of the New Jersey Devils go at it for a full two minutes and 34 seconds on Saturday, how can you not show some love for a bout that goes the distance.

Both combatants threw dozens of haymakers and a few jabs as well, all the while maintaining their balance in order to prevent the linesmen from stepping in to break things up.  Taking place only six minutes into the game, both Jansen and Letourneau-Leblond had both their respective teams and the fans on their feet by the end of it.

It was quite the bout, and clearly the most entertaining part of a game that ended with a 1-0 score in favor of the Blues.  If you have three spare minutes, I’d advise you take a look for yourself.