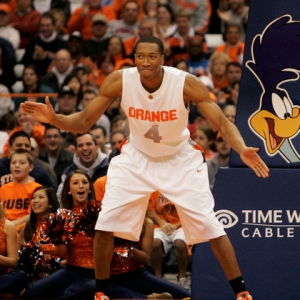 March Madness is a time when players that you haven’t really heard of all year take the national stage.  Wesley Johnson is not one of those players.  In fact, Wes was the Big East player of the year and is well known in most college basketball circles as being an excellent player.  He is projected as a top 5 lottery pick in this year’s NBA draft and is extremely talented as well.  Known as being a bit too unselfish at times, he rose to the occasion in the 2nd round yesterday and took the game into his own hands.

Against a very good Gonzaga Bulldogs squad, Johnson scored 31 points on 11/16 shooting and hit 4 of the 6 three-pointers he attempted.  His Syracuse Orange hit 12 3s in a thumping of the Bulldogs.  Johnson injured his shooting hand in February, but he has clearly recovered in that department and his scorching hot shooting yesterday confirmed that.  He also pulled down 14 rebounds and did pretty much everything his team needed from him en route to the 87-65 drubbing of Gonzaga.

The Syracuse Orange are in a great position to reach the final four, having to play Butler next week and then if they win that game they will advance to the Elite Eight where they will play the winner of the Kansas State-Xavier game.  If Johnson continues to play this way, he won’t only win more “Stat Lines of the Night” and raise his draft stock, he may help his team into the Final Four and beyond.