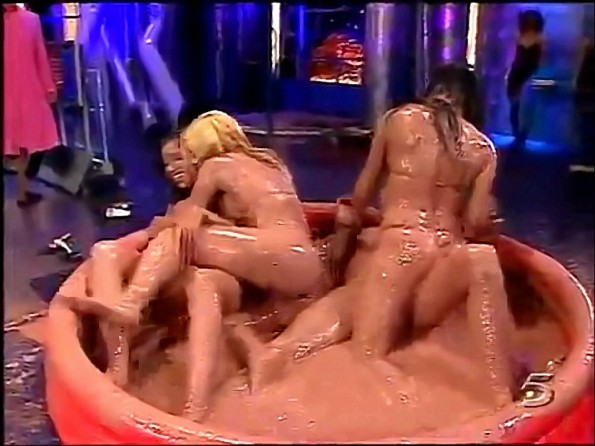 The word “sports” is a difficult word to define.  In general, we think of it as a game of athletic prowess.  I’m not sure where naked mud wrestling falls into that definition, but I can assure you that sports fans enjoy it.  I mean, its as much of a sport as Dancing with the Stars is, and that holds our interest, right?  At least when Erin Andrews is prancing around.

You’re probably wondering: Where can I watch bikini mud wrestling on TV?  That is one of the great challenges of seeing women break out in a naked mud wrestling match, you never know when its going to happen.  For instance, in this video, some unsuspecting, unassuming fans of this strange Spanish talk show were going about their business, watching their favorite TV show, when all of a sudden, for no understandable reason (to the non-Spanish speaking at least), 3 gorgeous women and a guy stripped down and started mud wrestling.  Rare is the sport where the “athletes” are more attractive than the fans, so make sure to fully enjoy this.

If you are asking who won the match, you’re clearly missing the point.   The point is…sorry, I got distracted by the amazing displays of athleticism in the video.  What was I saying?  Anyways, tune in next week to a random show in a random language on a random channel, and you might be lucky enough to see one of these great contests break out.