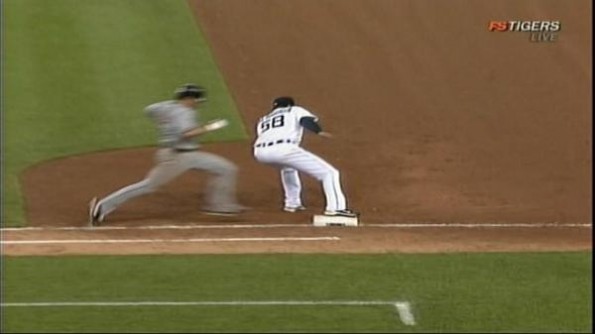 We have already given him The Stat Line of the Night, but the Major League record books will forever be absent of one particularly worthy name, all because an umpire couldn’t get it right.

It was the top of the ninth in a game between the Cleveland Indians and Detroit Tigers at Comerica Park, and with two outs already recorded, Tigers’ starting pitcher, Armando Galarraga, was only one out away from pitching the third perfect game of the season, and the 21st in Major League history.

Much like Mark Buehrle’s perfect game a year ago, Galaragga required a game saving catch, this one from Austin Jackson, to record the first out in the ninth inning.  He got the second out on a soft infield grounder and was now only one out away from history.

With Jason Donald at the plate, two outs and a 1-1 count, the Indians’ shortstop hit a grounder to Tigers’ first baseman Miguel Cabrera.  He quickly tossed the ball to Galarraga, who was covering at first, and there it was!  History had been made!  Or at least that was what everyone in the stadium had thought, except for first base umpire Jim Joyce.

Joyce called Donald safe, even though replays showed that he was clearly out by a step.  You would think that Joyce would just give Galarraga the call on a play this close.  Think about the repercussions.  If he calls him out, and Donald is in fact safe, no biggie.  It isn’t like the Indians were going to come back anyways.  But by calling Donald safe, when he was in fact out, he has robbed the Tigers’ 28-year-old pitcher of a spot in the history books.

You think Joyce is aware of that?  Here is what he had to say about the blown call after the game:

“I don’t blame them a bit or anything that was said. I would’ve said it myself if I had been Galarraga. I would’ve been the first person in my face, and he never said a word to me.”

As bad as that call was, and as large as its implications were, you have to hand it to Joyce.  He stood there and took the criticism like a man, and he was also man enough to own up to his mistake after taking a look at the replay.  Being an umpire and making a call in real-time is a lot tougher than we often like to believe.  The element of human error is bound to be a factor at times.  It just sucks for people like Galarraga and Joyce when it becomes a factor during times like this.