>Total Pro Sports
More
Does It Get Any Better Than A Mic’d Up Coach Being Ejected? (Video)

Does It Get Any Better Than A Mic’d Up Coach Being Ejected? (Video) 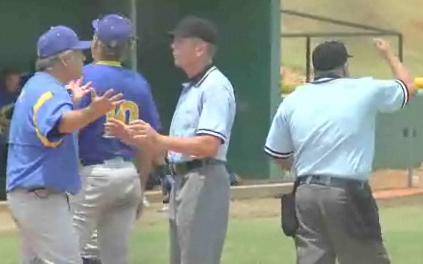 This video is nothing short of amazing!  And just what exactly makes it so amazing?  I’m not sure where to start!

How about we begin with the fact that the ejected coach, Wally Backman, coincidentally had a mic on him, which allows us to hear each and every “FU” and “BS” with perfect clarity.  Then there is the emptying of every bat and ball from his dugout onto the field, instructing the umpires to “pick that sh*t up you dumb motherf*&kers.”  Wally is even kind enough to ask the opposition’s catcher to move out of the way so that one of his arrant bats does not hit the innocent bystander.

And after working up a sweat from all of the swearing and bat heaving, what better way to cool down than by smashing a few beers with your ejected right fielder.  Check out the reaction of the players in the dugout when Wally invites Doc Brooks for a beer (4:10 mark)