Picture Of The Day: Cubs Fans And Their Matching Tattoos
MLB

Picture Of The Day: Cubs Fans And Their Matching Tattoos 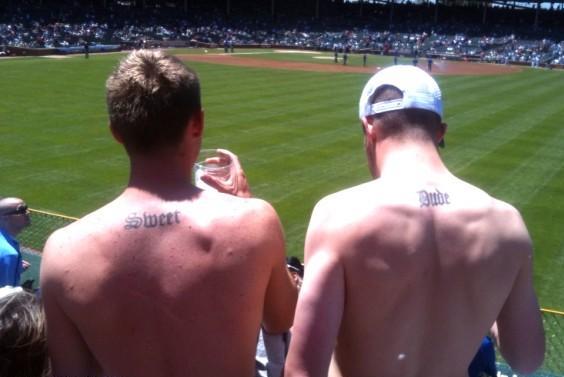 You would think that getting the words “sweet” and “dude” tattooed on your back is so stupid that the only place you would see such stupidity is in a stupid movie like Dude, Where’s My Car.  Well it appears as though there is one place on earth where you can expect a similar level of stupidity.  That would be the 1060 West Addison Street, Chicago, IL., better known as Wrigley Field.

(Please excuse the excessive use of the word stupidity, but you try and find a better word to describe this!)

It is one thing to attempt to use binoculars in order to provide your camera with an extra zoom, or shield your eyes from the sun when there is a perfectly good baseball cap on your head (unfortunately it is being worn backwards, defeating its purpose), but to show up at the ball park without a shirt to cover up the dumb mistake you made when you told some guy to put the words “sweet” and “dude” on your back is pretty much inexcusable!

I guess this it what happens when you play a majority of your home games during the day.  Students begin ditching school to the point where its effects have become increasingly evident.