Did This LeBron James Fan Survive The Night In Cleveland? (PIC) 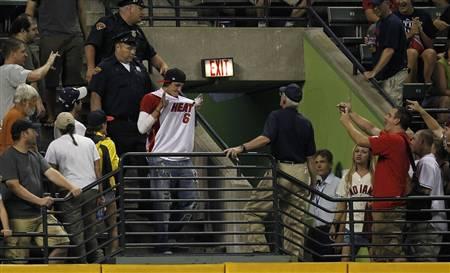 Ever since LeBron James turned his back on the city of Cleveland in order to head south and form a New World Order in Miami with Dwyane Wade and Chris Bosh, he has become public enemy number one in his hometown.  So what is the smartest way to get your ass kicked in Cleveland these days?  Try wearing a #6 LeBron James Miami Heat jersey around town.  That should do the trick.

This guy had the balls to do so last night at Progressive Field during the Indians game versus the Yankees, but he only lasted until the sixth inning before being escorted out of the ballpark by security.  Seated in the left field bleachers, hundreds of fans screamed obscenities at the man throughout the game, and several fans even continued to follow him as he was escorted out.

Screaming obscenities are fun and all, but doesn’t it seem a little odd that his jersey is free of any beer stains?  Perhaps that is a tribute to the people of Cleveland’s willingness to drink their beer, rather than waste it on others.  Although, I’m not entirely sure I would consider dousing a LeBron James fan with beer a waste these days.

Looks like this guy is just another one of those douchebags your likely to find at a ballgame.