Right now, LeBron James is one of the most polarizing figures in sports. Even Michael Jordan in talking smack about him, which must be humiliating. But LeBron is far from unique in the pantheon of hated sports figures. Here's a look at seven others who are possibly hated more than Lebron.[...] 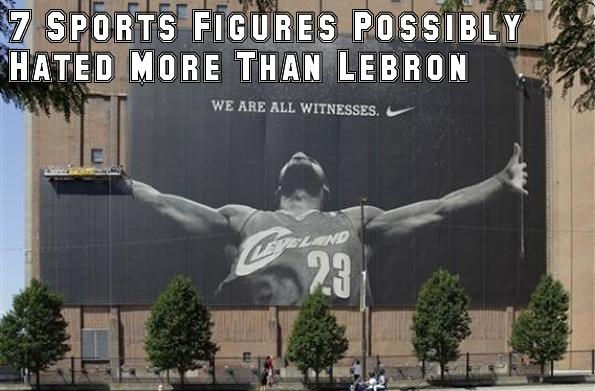 Right now, LeBron James is one of the most polarizing figures in sports. Even Michael Jordan in talking smack about him, which must be humiliating.

But LeBron is far from unique in the pantheon of hated sports figures. Here’s a look at seven others who are possibly hated more than Lebron.

Red Sox fans are a funny bunch. They are often so possessive of their players (during the bad times, ironically), that even if a player is traded or released by powers beyond their control, they are expected to play in some far corner of the universe so as not to ever affect the Sox again.

Well, life doesn’t always work that way, so when the Red Sox poster boy and best pitcher of the 80’s and early 90’s gets cut by management for being in the “twilight” of his career, what’s he to do to placate his original fans?

Well, apparently they shouldn’t do what Clemens did, which is make trails out of town without so much as thanking or even acknowledging the team and fans that aided him in all his successes. Then you DEFINITELY shouldn’t have a career renaissance in Toronto, winning two Cy Young Awards. But the thing you ABSOLUTELY, POSITIVELY shouldn’t do after that is put on a Yankees uniform and suit up against the Sox in the most compelling rivalry in sports.

Guess what Clemens did?

Naturally, he won two rings with the Bombers and chiseled his name onto Boston’s shitlist in the process. His actions, along with Boston’s World Series drought and damning steroid accusations following his retirement probably vaulted him to the top of the shitlist, allowing Bill Buckner to breathe a sigh of relief.

There should be a special spot in sports traitor hell for the people responsible for not only depriving a city of a certain star player, but picking up the entire effing team and moving it to the owner’s hometown in (ugh) Oklahoma City.

There should be a deeper spot in hell reserved for an owner that uses his buddy-buddy relationship with the commissioner to get this done despite outpourings of support from not only the teams fans, but the former owner of the team (who happened to be the founder of Starbucks).

Well, this all happened, and Clay Bennett, owner of the newly christened “Oklahoma City Thunder” still walks the earth unmolested. To his credit, he has really turned the team around. To his detriment, why couldn’t he have done the same f*cking thing in a larger city with an established fan base?

Answer: He didn’t want to. It’s widely held that Bennett bought the fledgling squad with every intention of moving the team to OKC just as soon as he could. Well, he needed a reason first. His reason was that he needed a new stadium for his team, as their current digs in Seattle were in such bad shape that the team couldn’t be made profitable. When the city of Seattle balked at such demands, Bennett decided he was taking his ball and going home. He got the commissioner’s blessing and hauled ass to the Oklahoma.

Meanwhile, Seattle is left to snack on the anemic successes of the Seahawks and Mariners. Yay?

What’s a contract, really? Well, to Rich Rodriguez, a contract is more like a strong suggestion than anything else. Four months after renegotiating a contract to coach for the University of West Virgina, in his home state, Rich Rodriguez simply changed his mind. He wanted to be the head coach at Michigan, a position he had been offered immediately following the departure of UM coach Lloyd Carr. He changed his mind after the regular season in 2007, but before their Fiesta Bowl game in January. So did he do the noble thing? Well, do you think the noble thing is to walk away from your team immediately, on the eve of a national bowl game that they had been working toward all season? Cause, yeah, that’s what Rodriguez did.

He moved to Ann Arbor and agreed to pay West Virginia SOME of their money back.

Fortunately, karma has a way of sorting this stuff out. During R-Rod’s short reign, Michigan has gone 3-9 and 5-7 in the 2008 and 2009 seasons, respectively. Further, Michigan has lost several players who disliked Rodriguez as a person and/or a coach. And finally, UM has gotten hit with the first recruiting violations in the history of its fabled program while Rodriguez was at the helm.

A “Fire Rodriguez” campaign is currently alive and kicking among the Wolverine faithful.

Boozer had been a standout player for Duke in the 2001-2002 season and was drafted by the Cleveland Cavaliers that summer. After a promising rookie campaign, he stepped up his game even further the next year playing with a gentleman by the name of LeBron James. Thing were going well for both Boozer and the Cavs at the end of the 2003-2004 season, so Cleveland gave Boozer a raise from $700k per year to about $6.3mm. There was a year left on Boozer’s contract, so in order for the Cavs to pay Boozer more, they had to release him as a restricted free agent, with the understanding that Boozer would immediately re-sign with the Cavs and roll around in his new pile of money or something.

Well, Boozer saw this as the perfect opportunity to take Cleveland’s good faith gesture and use it as an opportunity to test the free agency waters. Utah offered him almost $12mm per year, so Boozer skedaddled to the Mormon state leaving Cleveland wondering what the fuck just happened. To this day, Boozer states that no understanding was reached between him and Cleveland when he was cut. This is a pretty odd assertion, considering Cleveland probably wouldn’t have released Boozer if there hadn’t been an agreement, cause they could have just paid him the $700k the next year and say goodbye. Regardless, it turns out that Carlos was just lubing them up for what would happen with King James six years later.

Canadians have a well-deserved reputation for being wonderful, polite people. Just don’t fuck with their hockey. Well, Peter Pocklington, the owner of the Edmonton Oilers decided to fuck with their hockey. By sending the messiah of hockey, Wayne Douglas Gretzky, to the godless denizens of Los Angeles in exchange for a shitload of cash. $15 million to be precise.

To add insult to injury, Gretzky discovered he was being sold about an hour after the Oilers had won their fourth Stanley Cup in five years in 1988. Why did Pocklington send Gretzky packing to SoCal? Well, some of his other ventures were failing, so he needed some cash.

Unsurprisingly, news of the trade and the reasons behind it went over like a lead balloon in Canada. The leader of the democratic party in Canada pleaded with the government to block the trade. Pocklington was burned in effigy outside the arena.

Understandably, Canadians bore no ill will to Gretzky. He received a four minute standing ovation his first game back to Edmonton. He is still considered a Canadian national hero. Pocklington, not so much.

Oh Cleveland. At this point you have to be suffering from battered-wife syndrome with your sports teams. Before you were getting hosed left and right by your basketball players, one guy decided to take away your football team.

Let’s examine Modell. He was the owner of the Browns for 35 years. He was from Brooklyn, NY. He had assured fans many times that he would never move their beloved franchise because he can remember how devastating it had been to the residents of Brooklyn once their team up and went to LA.

In 1996, while Cleveland approved taxpayer-funded improvements to Municipal stadium, Modell had ironed out an agreement with Maryland to move the Browns to Baltimore.

Cleveland fans were…umm…upset. They sued Modell, burned him in effigy, regular refer to him as “Judas”, and a quick internet search confirms that there are several “Art Modell Death Watch” sites floating around out there. These people aren’t likely to forget anytime soon.

Cleveland got a new team in 1999, but the damage has been done. Art Modell’s legacy in Cleveland makes one wonder if LeBron’s actions are actually capable of eclipsing one man’s theft of a struggling city’s football team.

As mentioned in the Roger Clemens item, it takes a special type of traitor to not only bail on their team, but suit up for a rival. Nick Saban’s just that special type of guy. After leading the LSU Tigers to unmatched success in perhaps the most intense college football conference in the US, the SEC, he bailed to go coach pro for the Miami Dolphins.

“Whatever, shit happens,” the Tigers faithful said to themselves. But after getting a little egg on his face going 9-7 and 6-10 in his two years with the Dolphins, the Tigers fans figured that justice had been done.

Saban decided that the NFL wasn’t his particular brand of whiskey, though he made public assurances that he would not entertain the notion of filling Bama’s now-vacant head coach position (you can see where this is going….) He waited till the end of his NFL season and took a few interviews.

On January 3, 2007, Saban announced he had been hired as the head coach of Alabama. Despite a fledgling first season with the Tide, the karmic gods have largely decided to ignore Saban’s transgressions, as Alabama has enjoyed stellar seasons the past two years, including a national championship in January of 2010.