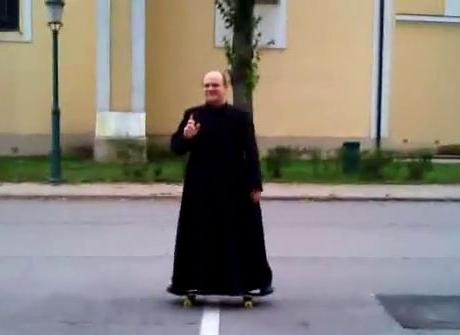 The reputation of priests from the catholic church may have taken a hit over the past decade or so, but there is one man who is making it his mission to change that.  That man is the Reverend Zoltan Lendvai, a 45-year-old priest who has been preaching the word of God in Redics, a small village along Hungary’s boarder with Slovenia.

Following in the footsteps of Saint John Bosco, an Italian priest from the 19th century who used games to teach and improve the lives of poor youths, Lendvai has used his skateboarding skills to connect with his younger audiences, and it appears to be working.  Apparently, his smooth moves on the board were enough to get three teens between the ages of 16 and 18 to begin attending church.

Here is a look at some of those moves.