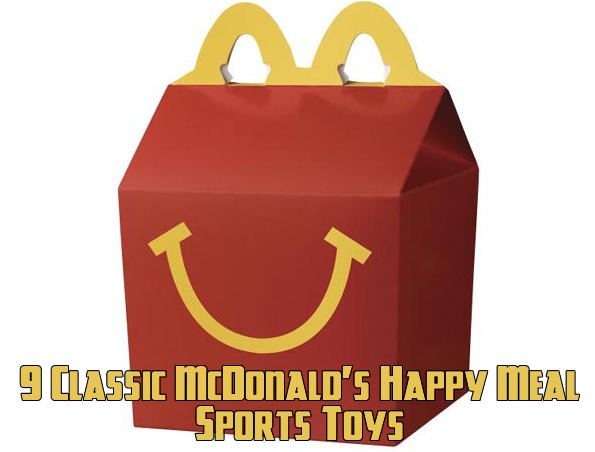 Upon writing this article, I was both shocked and dismayed to find out that McDonalds has recently been bullied by politicians to stop including toys in their Happy Meals. Their claim is that the inclusion of toys encourages children to eat unhealthy food. Which is odd, because seeing as how McDonalds is a fast food operation, every aspect of their business presumably encourages people to eat unhealthy food.

So let’s go back to a simpler time, when grey meat patties and reconstituted chicken things were made all the more delicious by the addition of cheap plastic choking hazards. Below is a list of the nine most awesome McDonalds sports toys. Happy meals, indeed. 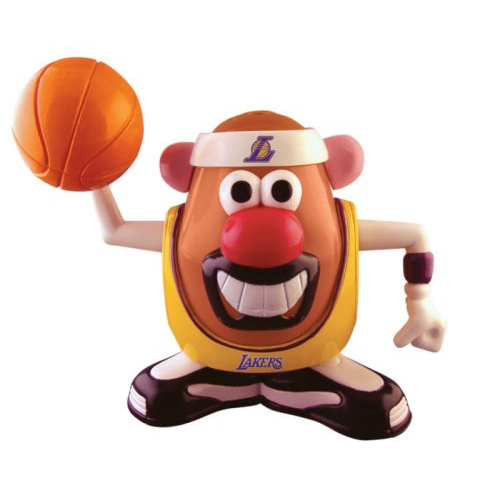 There should be a picture of this guy under the word “excellence” in the dictionary. While the juxtaposition of Mr. Head and athleticism seems odd at first, there exist some pretty strong reasons for this marriage. First of all, the mustache hearkens back to the glory days of a young Kurt Rambis (goggles not included), who maybe wasn’t a Laker great, but was widely considered a Laker “good.” Secondly, he’s got the body to own the paint, box out opponents and be a top-tier glassman, reminiscent of another rotund NBA great, Chuck Barkley. Finally, the eyes. Potato Head’s unflinching stare screams “laser beam focus,” which means that he either had the eye of the tiger, or like so many other late-70’s NBA players, he did a ton of coke. Or both.

This promotion was a rare instance of a McDonalds Happy Meal toy actually being worth a damn. Nerf seems like a great partner for McDonalds because their products are cheap, promote activity (kind of) and are things you can actually use. Let’s take, for instance, the football goal posts and ball. Everyone loves to play paper triangle football, right? Right. But using your fingers as the goal posts and a folded piece of paper as a projectile is pretty ghetto. So, thanks to this toy, you can play America’s favorite time-wasting game without feeling like a poor person. All upside.

Questionable inclusions: The hockey game and the basketball hoop. Shooting a puck or ball into a minuscule goal doesn’t feel so much like a game or “fun” as it does something to do to pass the time until Death pulls your card. You could probably use these as devices to test the level of intelligence of Rhesus monkeys, but that’s where their utility stops.

McDonalds has gone digital? Sort of. Judging by the casing and the number of buttons (one or two, depending on the game) something tells me that the guys at EA Sports weren’t exactly sweating these devices as serious competition. It appears that McDonalds wasn’t shooting for the authenticity of Madden ’09, but perhaps something more akin to the old Manhole hand-held game that I would play at the Orthodontist’s office in 1988. Was it fun? It was more fun than getting my braces tightened. Marginally. That’s the best endorsement I can, in good conscience, give these games.

I really don’t understand how this game works. It would appear you push an air pump, causing a bat-shaped piece of plastic to rotate, possibly hitting a somewhat spherical hollow piece of plastic into or near a piece of cardboard with three holes in it.

The Fictional Association of Toy Raters gives this toy 12 thumbs down.

5. Michael Jordan Fitness Fun Program
There’s nothing fun about getting in shape. It’s hard work that requires dedication and sacrifice. A logical first step would be to cut out fast food. But that didn’t stop McDonalds from marketing this “Fitness Fun” program, with a tie in from NBA great Michael Jordan, no less. Be like Mike: contribute to childhood obesity!

You know what kids under the age of ten love? NASCAR. Nothing gets a toddler fired up like detailed analysis of stock car telemetry and pit times. The car itself is a nice touch, but the NASCAR branding seems to be a bit specious. Give the kids a toy car. The NASCAR branding doesn’t really add much to the value of the toy here. But what adds even less is the inclusion of a “collectible” trading card of NASCAR driver Bill Elliott. If you come across anyone who is collecting these things, run, don’t walk, to the nearest phone and call the producers of A&E’s “Hoarders.”

This is what I’m talking about. Don’t give me Bill Elliott trading cards or crappy digital sports games. Give me a Hot Wheels that I can play with for five minutes till one of the wheels bends, rendering the car immobile. Then let me put that car in a drawer for three years so the it can slowly corrode.

If the car doesn’t break, let me play with it for three more minutes until I get completely bored of it, then let me give it to a simple kid with a head injury so that he may enjoy it for hours and hours on end.

Hot Wheels race cars are the quintessential Happy Meal toy. No need to get all fancy with your prizes, Mickey D’s.

* Grimace is too fat for me to believe that he/she/it does anything athletic. Amorphous purple blobs don’t rollerblade. They sit in chairs in hospital waiting rooms watching Judge Joe Brown and breathing loudly.
* The name of the toy says “Roller Blade” and not “Roller Blades”, which I thought was a typo until I looked at Gigantor’s feet. One square “Roller Blade.” How does one propel oneself forward with legs strapped into what is essentially a moving dolly?
* Why must any child or child’s toy depicted in an “Extreme Sport” always look like such a dork? Extreme athletes are cool because they DON’T wear helmets. The only way Grimace could be less extreme is if they rolled him up in bubble wrap and tossed him on a bike with training wheels.
* With the backpack and orange shoes, this really looks more like “Hippie Mountaineering Grimace” than “Extreme Roller Blade Grimace”.

Get your house in order, McDonalds.

Birdie is not what most people would consider to be “attractive.” She has duck lips, heinous pigtails, an almost clinical obsession with flying, and what appear to be webbed hands. As such, Birdie doesn’t ever need to be shown wearing a swimsuit. She’s repulsive.

Furthermore, for decades now, you have depicted Birdie wearing goggles atop her head. She clearly keeps them on hand for a reason. She’s riding a jet ski for God’s sake. Let her wear her goggles to keep the spray out of her eyes. I can’t think of a better time for her to wear her goggles. Let the baby have its bottle.