9 Defunct Sports Venues We Wish Were Still Around 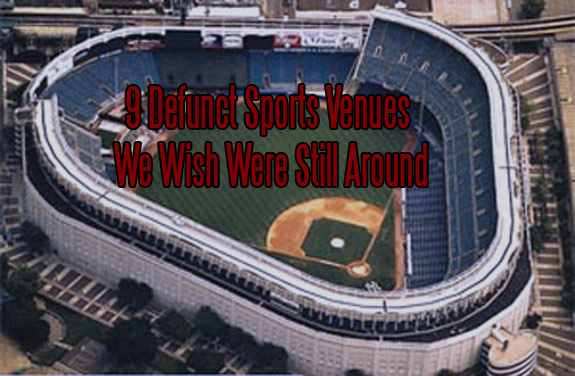 Generally speaking, time brings progress. A forty year-old ball park should be replaced by a new one that is more comfortable, better looking, and presumably, more interesting. This is almost always the case.

Below are a few of the rare instances in which a ballpark, arena, or stadium has proven itself superior to its successor. Let’s give it up for nine sports venues that we wish were still around. 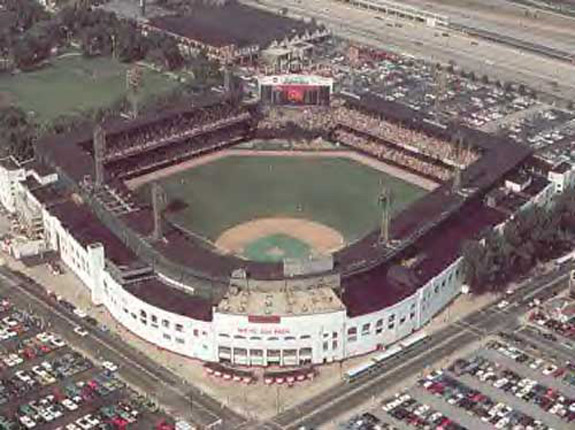 When you replace a baseball stadium, the replacement strategy shouldn’t be “build a new ballpark, then, eight years later, spend ten years correcting initial problems with the park.

While the original Comiskey Park had its charms, the underlying reason we miss it is simply that the new ball park sucks. Renovations have been pretty much non-stop to mask the myriad flaws that were in the original design. The front row of new Comiskey’s (now U.S. Cellular Field) upper deck was higher than the top row of the upper deck of the older Comiskey, making for some pretty atrocious vantage points. 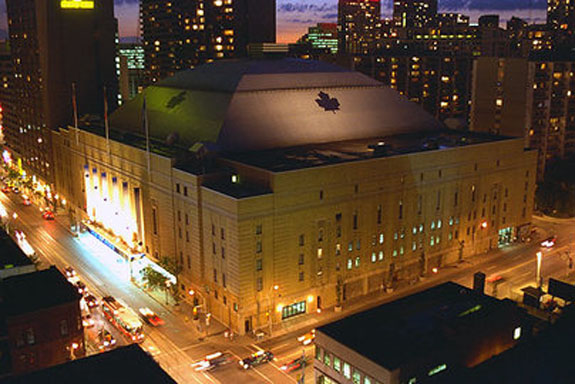 Despite the dilapidation of many of the classic sports arenas like the Boston Garden, MSG, and Maple Leaf Garden in Toronto, their replacement is often met with disappointment due to the rich tradition and architecture that dies with them. Maple Leaf Garden was to hockey what Notre Dame cathedral was to Catholics.

Owners, fans, and media are all torn by the desire for comfort and progress and the desire to hang on to a building with a history, a tradition, and an electricity that hits you every time you enter the building. Few places demonstrated the latter characteristics better than Maple Leaf Gardens.

The Air Canada Centre has proven to be a decent enough replacement, with a central location in downtown Toronto, but its shared use the Toronto Raptors may very well prevent it from ever becoming the institution that Maple Leaf Garden was. 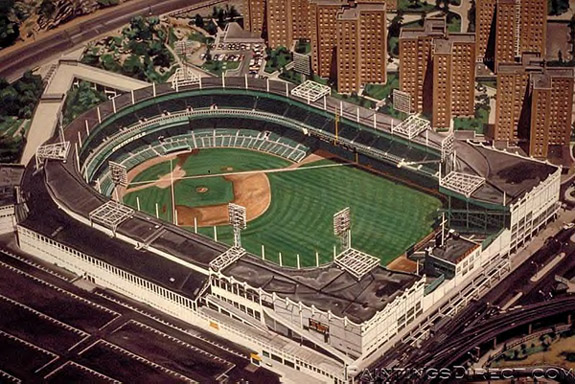 While it’s probably not very feasible that this venue, originally built in 1876, would still be in decent enough repair to host events, but it was used as a temporary home for the Mets in the ’62 and ’63 seasons.

The reason for the early Polo Grounds’ inclusion on this list is that it’s simply different. While new ballparks take measures to ensure that their ballpark is unique, for the most part, the fields are the same size and shape with some minor tweaks. However, ballparks in the good ‘ole days were truly unique.

It would be something to see modern players responding to the game-changing nature of a gigantic field. Power hitters would be neutralized, speed would be rewarded in a manner fans haven’t seen in years. Surprisingly, the lines down the sides are only 279 feet in left field and 257 feet in right field, so players that pull or push would thrive as well.

There was nothing horribly wrong with the Polo Grounds’ replacement, but the idea of having a complex, different field to confuse players and amaze fans sounds too good to pass up. 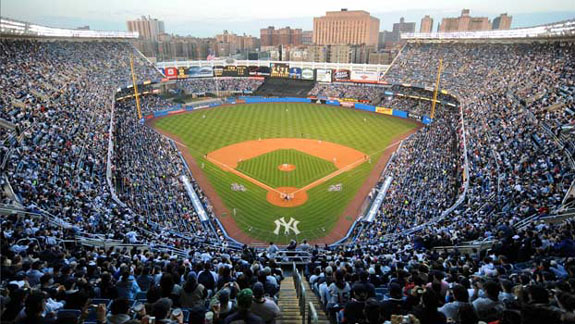 While the new Yankee Stadium is certainly, with its $2.3 billion (!) price tag, including the necessary improvements, is nothing to sneeze at, the former Yankee Stadium, around since 1923, perhaps offered more history than any other ballpark in the nation. The iconic towering bats outside the old stadium had been memorialized in everything from Seinfeld to The Sopranos.

The reasoning for the replacement stadium was simply financial, no more no less. I didn’t notice a public outcry demanding a new stadium, but rather an opportunity to justify charging twice as much for virtually everything and catering to the corporate client, not unlike the Washington Nationals.

While the new stadium shares virtually the same location and will undoubtedly be the source of many new memories, allow us time to grieve the loss of the Evil Empire’s headquarters, or Death Star, if you will.

5. Anaheim Stadium (before the renovation) 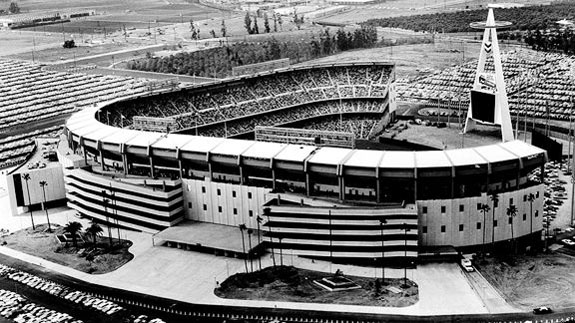 While many of the entries on this list had tangible advantages over their later incarnations, Anaheim Stadium suffered from a crippling case of “Disney” later in its life, making the (pretty unremarkable) stadium feel more like an extension of its neighbor, Disneyland. The re-monikered “Angels Stadium” has a feel so saccharine that your teeth begin to rot upon entry.

While many probably appreciate the clean, borderline-sterile environment, it now doesn’t feel like a place where history will be made. The sound of Thunderstix and rally monkeys replace cheering and clapping.

While many of the stadiums built since 1989 have suffered this fate, Angels Stadium takes the consideration of families and a “day at the ballpark” to new, mind-numbing extremes. More theme park than ball park, sadly. 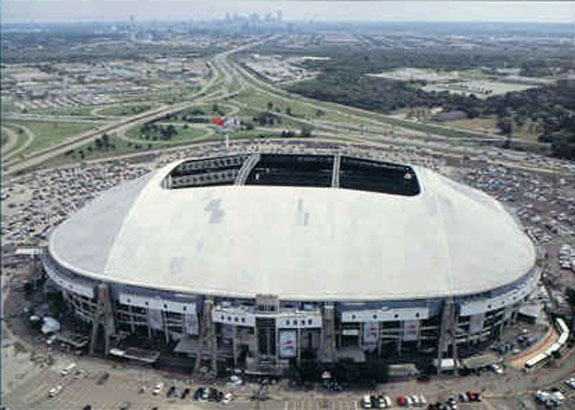 Let me preface this by saying that the recent demolished Texas Stadium was awful. Spectacularly bad. The hole in the roof created horrible contrasts between shadow and sunlight, the luxury suites had enough wood laminate to furnish a 1970’s condo development, and the outside looks like the structure was designed with zero regard for aesthetics.

The new Cowboys Stadium is superior in ever manner possible, save for a step back in geography. Its Arlington location is somehow worse than the previous Irving setting. It’s bigger, state-of-the-art and visually striking. So why on earth would I suggest that the old one should have been kept?

I really don’t think we should have played another down of football in Texas Stadium, but I’m even less crazy about the new stadium. The egomaniacal Jerry Jones, along with the late George Steinbrenner have raised the bar unreasonably high for future sports venue developments. Traditions will be lost, ticket prices will rise even higher, and the experience will feel more like a variety show than a sporting event. A stadium that looks like a spaceship doesn’t outweigh those negatives. 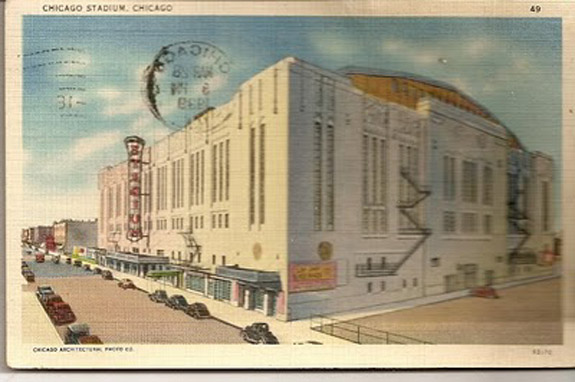 Chicago Stadiums last games were held in 1994 to make way for the United Center, which house both the Bulls and Blackhawks, just like its predecessor did. Chicago Stadium is a testament to the virtues of the golden age of arenas (in my opinion, the 20’s and 30’s).

By 1994, the golden age was at least two generations in the past for most franchises, meaning that most structures up serving NBA and NHL teams where utilitarian eyesores constructed in the 60’s, 70’s, and 80’s. The remaining arenas like MSG, Boston Garden, and Chicago Stadium were a dying breed. Today only MSG remains.

While I understand the revenue implications of using an outdated facility, I also realize that most teams are racing to the future to justify higher ticket prices, while largely turning their collective backs on tradition. The United Center was needed to bring the Chicago sports teams into the 21st century. I just wish the changes could have been made within the walls of one of the most striking arenas in the nation. 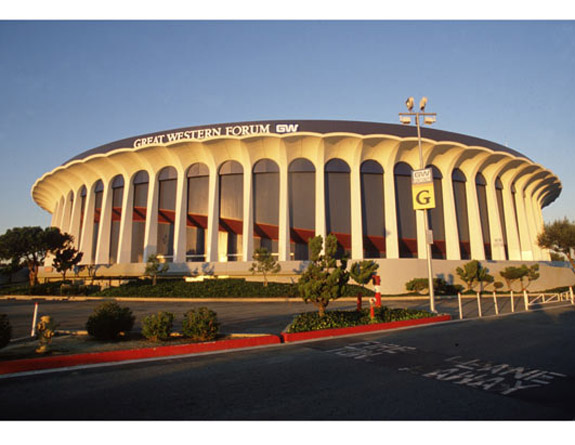 Again, this entry on the list is due to a mix of the old arena containing so much history and the new arena being so void of character.

When we look back on the era of stadiums built in the past two decades, the Staples Center will perhaps be considered one of the most unremarkable of the group. Besides the introduction of an eight-suite nightclub located among the luxury boxes, there isn’t a single interesting aspect of the Staples Center. It’s located in downtown LA among a pre-fab entertainment district called LA Live, the exterior makes it look like a large, modern department store, and the lighting….oh the lighting.

I don’t know if it’s an effort to emulate the “spotlight” that Hollywood is known for, but the discrepancy in lighting between the court and the stands is night and day, which can really remove the crowd from the game. The black audience and well-lighted court are more suggestive of Cirque De Soleil than a basketball game. Couple that with the fact that it’s the homecourt to both the Lakers and the Clippers and it should feel more like a foster home than a homecourt.

The Great Western Forum was old and pretty ugly, but it was the home of “showtime” and had a character unique to LA. Despite some questionable exterior architecture, the this is one more instance of originality and history winning out over a “McArena”. 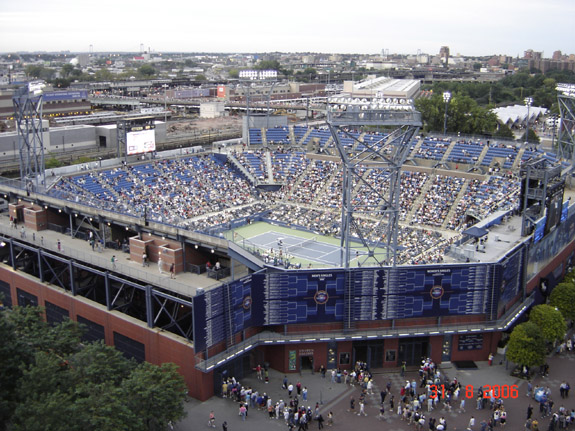 You don’t know what this is, do you? Neither did I until I started to read that the US Open’s Arthur Ashe Stadium is widely regarded as among the worst sports venues in the United States. Naturally, with a facility that bad, everyone gets nostalgic for what once was and will never be again.

The height of the upper deck of Ashe Stadium is higher than the highest point of Shea. The stadium is so monstrous that the venue doesn’t even sell out for the finals game, creating a rather pathetic, empty atmosphere for almost any early round game. This demonstrates that even the USTA is susceptible to that toxic “bigger is better” thinking.

The old stadium was named after jazz master Louis Armstrong, which in and of itself is completely awesome. It was only 33 years old when it made way for the new guy. It’s capacity of 10,200 was dwarved by its replacement’s ability to hold 22,000 fans, which almost certainly worked out to the latter’s detriment. Yet another instance of nostlgia being brought about by nothing more than crappy current circumstances.