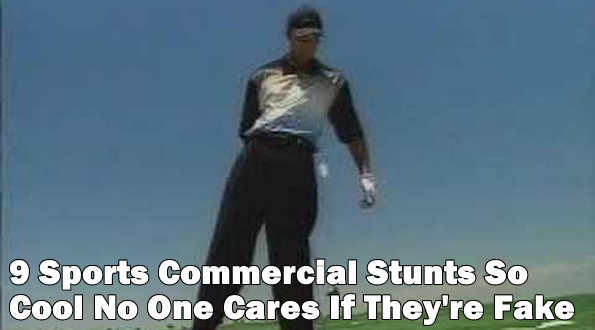 While athletes have the ability to amaze us on the field, the advent of viral videos allows many of those same athletes to blow us away just by screwing around.

Be it during practice, outtakes during commercials or photo shoots, even when the pressure’s off and nothing’s at stake, the best of the best can still renew respect for both them and the difficulty of their sport. Even when they’re fake, they’re still pretty damn impressive, and the fact that we have to ask ourselves, “Was that real?” speaks volumes about how these guys can captivate us.

Here are nine examples of athletes that made our jaws drop off the court, sometimes with a little help from CGI.

This commercial best defines the ability of an athlete to present their skill set in a totally different context. Golf was never considered cool until Tiger came along. While filming a scripted Nike commercial, there was some downtime between takes. Tiger was having some fun with the crew by showing them a few parlor tricks he could pull off with a golf club and ball.

With the “bouncing ball trick”, Tiger amazed the crew so much that they decided to film it, add a peppy soundtrack, remove any dialogue, and create an icon commercial. My friends tried to mimic this trick and rarely got past three bounces with their wedges.

While it doesn’t take a superstar to pull off a couple of the stunts on this list, when danger is involved, it might very well take the confidence of a superstar to know that you’re not going to hurt yourself or someone else.

Such is the Kobe Bryant vs. Aston Martin video. While there is no proof (nor any evidence) that this video is fake, the skepticism over whether or not Kobe would jeopardize his career over such a stunt seems to be valid, but Kobe is such a competitor with a bit of a little kid streak that I’m not willing to discount it.

This is perhaps the most compelling video on the list because of a) the inherent danger of the stunt (knocking out the dude’s eye or taking off his nose) and b) the confidence that Federer has when he’s squaring up for the feat.

While Gillette has publicly stated that it’s “up to the viewer to decide” if the stunt is real or not (which means it’s not), the fact that millions of people have watched this thing in awe is an indication that many think this guy really is something special. Even knowing the video is fake, I walked away from this with more respect for Federer than I originally had, which is a testament to the ad and the man.

While the veracity of some videos may be up for debate, this one is clearly a fake. And not even a particularly good one. Even someone with LeBron’s strength would need to chuck the ball with both hands from the other end of the court, in addition to the fact that the ball disappears from the frame in EVERY SHOT.

However, people were quick to rationalize and believe. Fans want their superstars to be larger than life and capable of the impossible, so doubting BronBron in this video was never a real option. Props to Powerade for being the first guys on this bandwagon and turning what could have just been another boring advertisement into a fun little spectacle.

Just thinking that there was once a commercial with Michael Vick in it tells you how long ago this thing must have been made. This was a piece of the same campaign as the LeBron video, but with slightly more plausibility. Michael Vick wasn’t the sensation LeBron was, and while everyone knows how hard it is to shoot a full-court shot, most sports fans probably aren’t certain how far a quarterback can throw a ball if they aren’t going for accuracy.

Well, this piece stretches our credibility on one end of the spectrum. He heaves this thing seemingly the length of the stadium, leaving millions of viewers declaring, “That was fake. Right?”

Again, we find that the sports we are unfamiliar with are the hardest ones to doubt. Especially in the age of viral videos, when so many remarkable things are captured on tape, who’s to say that this wasn’t a miraculous ride by a surfer that happens once in a lifetime?

Uhhh, we are. Given Powerade’s track record with the other videos. However, the verite-style news presentation and the “Perect Storm”-style environment did lend an air of credibility to an otherwise totally fake commercial.

While one must have been pretty gullible to think that Michael Jordan and Larry Bird were banking shots off of scoreboards and arena seats, this was the first commercial (that I remember, anyway) that stretched our notions about what our favorite athletes were capable of. Sadly, when we see MJ and Larry Legend playing “H-O-R-S-E” for the rights to an extra value meal, belief must be suspended almost immediately.

(Note: This video is worthwhile for a number of reasons, not the least of which are: Getting to see Larry Bird try to act, the crazy obvious green screen, the editing that allows any shot to look like it’s going in, and Michael Jordan’s awesome tribal print outfit.)

He’s good but not that good. Had Nike not gotten so greedy, the could have just as easily wowed us with Ronaldinho’s natural talents. Shame on you, Nike.

While I have always felt that motorsports stretches the definition of the terms “sport” and “athlete”, I nonetheless present to you this Mercedes-Benz ad which features a team of engineers finding a way to make an SLS complete barrel roll inside a tunnel.

Again, it’s a testament to the brand and the producers of the video that it’s very hard to doubt the veracity of the commercial. It looked very real, the Mercedes-Benz SLS is a totally bad-ass car, so why shouldn’t I believe that the car can do a tiny barrel roll with the help of a team of engineers?

The general consensus is that the video is fake, but Mercedes got many to think, even if temporarily, that Mercedes can drive upside down. And for $225,000, it better.