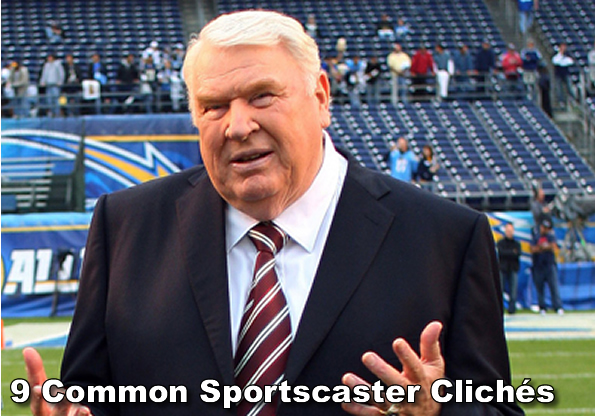 This list could easily be one hundred entries long. It’s not that announcers are lazy, uneducated guys; by and large, they’re not. However, when you have to speak for three hours, there’s only so much original thought you can shoehorn in before you have to go back to the deep well of clichés. Some clichés have merit, some make absolutely no sense and seem to exist only to make observations seem more poignant or insightful than they actually are.

The nine listed below might not be the most egregious offenses, but they are certainly among the most popular, so turn your thinking cap off and enjoy.

This particular cliché is dropped any time a player gets injured on the field. The commentators drop this one every time to let the audience know that they should not be happy when Tom Brady or Chris Webber go down like a sack of potatoes. What’s far worse than the use of this cliché is its inherent meaning. I don’t need Dick Vitale telling me how to feel about the misfortune of a player.

If A-Rod shatters his ankle sliding into second base, I won’t “hate to see that.” I would “love to see that.” It all depends on the player and context. For once, I would like to hear the announcers get fired up about an injury and call it “awesome,” just for variety’s sake.

By nature, every down is equally important. The “key” third down is just generally the last opportunity to convert and keep marching down the field. If teams actually went for it on fourth down (which some studies show they should), then the fourth down would be “key.”

Additionally, if the team treated the first and second downs as importantly as the “key” third downs, then maybe they wouldn’t be looking at 3rd and 16 on their own 5 yard line.

It sure is. So is crossing the street and skydiving. Even the most casual football fan is aware that a failure to convert a fourth down will result in a change of possession. And therein lies the risk. It really doesn’t warrant mentioning. Every decision in every sport is a calculated risk. There is upside and downside to every strategy and tactic. So why is the only time it seems to be brought up when a team is going for it on fourth down?

We’re aware of the consequences, so you can tone it down in the future.

4. “If the playoffs started today…”

When announcers run out of insightful things to say, they start with the hypotheticals. Late in the season, this phrase can shed some light on the playoff picture, but do we really need to know that if the regular season were to end three months early Charlotte and Atlanta would be duking it out in round one of the playoffs?

Announcers also ignore all the ramifications of an early playoff start. “If the playoffs started today, the Super Bowl would be in November.”

The quintessential senseless cliché. Instead of simply saying, “Player X is trying REALLY hard,” announcers decide to colorfully violate mathematical law by indicating that a person is giving more than they are actually capable of giving. “Player X is giving 100%” states the case just as well, while also demonstrating that you are able to wrap your head around how percentages work.

This particular cliché is noteworthy cause it has enjoyed some serious staying power. While other clichés have their moment in the sun, then fade away, “110%” has been going strong for decades upon decades, demonstrating America’s struggle with simple mathematical expression.

This is a very specific gripe. Often, an announcer will say something to the effect of, “If you’re Mike Shanahan, you’re not going to want to keep your shorthanded defense on the field any longer than you have to.” Which often will illustrate a valid point.

However, announcers will make the leap to presupposing you’re not just one person, but an entire organization. “If you’re the San Francisco Giants, you just want to put this whole Barry Bonds issue behind you and focus on the game.” Which raises a whole slew of new questions, like how would I feel if I was the Miami Dolphins or if I was the Los Angeles Clippers. Would I be chronically depressed? What would my average attendance be?

7. “They control their own destiny.”

One of the more existential clichés among broadcasters, this one actually serves a purpose in letting the viewer know that a team doesn’t have to depend on other teams winning or losing in order to achieve a certain playoff seed. However, the mental image is quite funny, thinking about the Patriots, winning games and controlling their fate, while the lowly Bills curse their preordained status to finish last in the NFL.

A team can’t just be “eliminated” from the playoffs, they have to be “mathematically eliminated,” which means exactly the same thing, but gives the announcers an air of intellectualism between talking about groin injuries and sweat contests.

As opposed to smart, calculated penalties. Penalties by nature are mistakes, so this one can be a tad redundant. Generally, this cliché only gets busted out during personal fouls like excessive celebration or roughing the kicker. Both of which are pretty stupid, but no more stupid than forgetting the snap count or being the 12th man on the field.