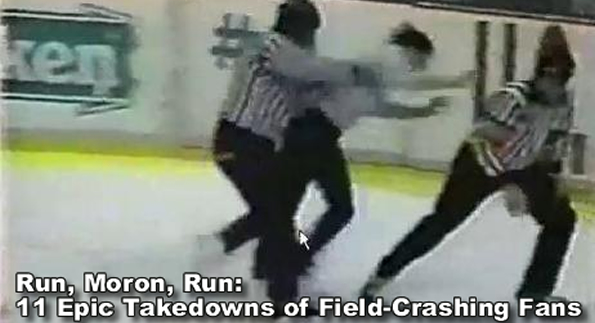 It takes a special kind of person to want to rush the field or court in the middle of a sporting event. They could simply be overrun by passion, they could be just drunk, or they could have deep psychological issues that require attention from TV and stadium audiences alike. The cause doesn’t really matter.

In the end, it all goes down the same way. Without doing too much research, it’s safe to assume that no one in the history of sport has gotten on and off the field without getting taken down, usually with extreme prejudice. So why does it keep happening? Who cares? As Matt Diaz of the Braves demonstrated last night, it’s just fun to watch. So let’s get to the 11 of the more glorious examples of stupid of fans rushing the field and getting taken down…hard.

11. Twins Fan ALMOST Gets Away”

Whatever the field security of “robbing a home run” is, it happens in this video. This has some really great elements, including: the fan showing how slow and out of shape the security guys are; the security team just generally looking like the Keystone Cops; and all the drama of a narrow escape. In this video, the fan becomes our protagonist. We want him to get over that wall. We NEED him to get over that wall. But alas, it’s not meant to be. Security latches onto the one thing they can, his remaining leg, only to pull him and snatch defeat from the jaws of victory (for the fan). He’s just another statistic in the tally of “morons that got pummeled by security.” In the meantime, keep drinking too much at sporting events and don’t forget to stretch before you jump that rail.

Read that title. Read it again. There’s virtually nothing else to say here. Only a Yale fan could get taken down by a team of Harvard cheerleaders. This guy probably went from thinking he was going to be “the guy that stole the Harvard flag” to “the guy that got jacked by HARVARD CHEERLEADERS.” Life can change that fast, folks.

Bonus feature: Listen to the Harvard fan in the closing screaming “KICK HIS ASS!” in the final seconds of the video. High comedy.

This is NOT one of the best takedowns in sports, but I include it to demonstrate a point. Takedown procedures are (gasp!) gender-biased. Or at least hot-girl biased. This girl gets her swerve on with virtually no fallout, save for a gentle escort off the field. We all know that, deep down, no one really wanted her to leave. If she was tackled like the rest of them, this would have been easily more disturbing than the knife guy a few items up.

Rob Ray’s all-out assault on this poor sap who jumped on the ice makes Matt Diaz and his take down look like a game of paddy-cake. Ray is so determined to beat the living s**t out of this guy that he actually hits the cops who are trying to haul the fan off.

7. Red Sox Fan (Again) Gets Taken Down Like a Steer”

In unsurprising news, Red Sox fans are making a repeat appearance on this list. This kid goes for the unorthodox “infield approach” with predictable results. What’s pretty extraordinary about this takedown is the security guy’s ability to stay in front of him and wrap him up. If it wasn’t for the hair, this guy’s style could be mistaken for that of a young Troy Polamalu.

Following the gravity of that last item, let’s get back to what crashing the field is all about: unbridled stupidity. =Again, the fan gets out there and does the same-old, same-old, but the gratuitous dogpiling after the initial takedown is pretty awesome. I think these fans forget that this is one of the few times security is able to demonstrate their chops to everyone watching, so don’t think for a second that they’re all not gonna get in on the action, overkill notwithstanding.