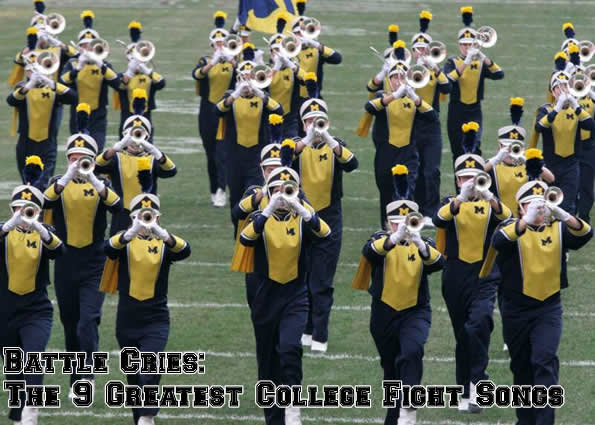 Whenever an argument breaks out over the virtues of pro football vs. the college game, one of the first cards to be played is the presence of college bands. Well, the bands wouldn’t amount to much if it wasn’t for the most proud of college traditions, the fight song. A fight song should inspire fear in the opponent, excitement in the fans, and a sense of history to everyone involved. The fight song, unlike any logo or mascot, is something that isn’t just owned by the team, but by the fans and alumni as well. While virtually every school has a fight song or an anthem, the following nine are in a class by themselves, giving goosebumps to college football fans the nation over.

It’s hard to extol the virtues of a singular fight song when so many of them sound similar, but this song stands out among the pack as one that SOUNDS like a marching song. Although it’s upbeat, it still sounds like a song that you would march into battle with, which is probably one of the best characteristics a fight song could have. The song’s unofficial title, “Falcone Fight” named after director Leonard Falcone, also helps the song’s cause. Any song title that features the name “Falcone” is instantly three times cooler than the same song without the word “Falcone”.

Begrudgingly, I’m including Harvard’s fight song on this list, strictly for the sake of decorum and tradition. Though it’s not much older than other school’s fight songs (1918), it’s gotten more airplay than almost any other anthem out there. While no one outside of Cambridge actually cares about Harvard football, Harvard’s world-class reputation has made this ditty about as ubiquitous as a fight song can get. So while it might not perk up ears on Saturday afternoons the way Notre Dame’s song does, if you busted this number out at the Nobel Prize committee meeting, you would probably get a pretty rousing sing-a-long. Which doesn’t make it as cool as they others, but it still merits recognition.

One of two SEC entries on this list, “Yea, Alabama”, stands apart from the rest in that it is somehow peppier than any other entry on this list. While the lyrics to the song are a bit of an oddity, referencing the Rose Bowl on one occasion, despite the fact that the SEC never saw the inside of the Rose Bowl until the BCS started, you can’t listen to this song and keep yourself from clapping. Go ahead. Hit “play” above and give it your best shot.

The similarity of all these songs leads me to wonder if there was some master class held in fight song composition in the 1920’s from which every composer took notes. The Arkansas fight song, cleverly titled, “The Arkansas Fight Song,” seems to have all the hallmarks of a many other songs from this era. Peppy beat, boisterous swing, and of course, the rousing horn section. While the SEC is steeped in tradition when it comes to college football, their fight songs haven’t entered the national lexicon the way those from schools in the Midwest and Northeast have. Well, it may not be as well known, but Arkansas’ theme is right there with the best of them.

While Hawaii is not the first school that comes to mind when you think of rich football traditions, its fight song is classic enough to fool you into thinking this team could have been in the Big Ten. The song was composed in 1914 and has a pretty sick name: “The Co-ed Fight Song.” If that isn’t enough, the subtitle reads “Respectfully dedicated to the college girls.” Respectfully, indeed, Hawaii.

Strangely, the Army song doesn’t sound as militaristic as some of the entries on this list, but it does sound plenty patriotic. It’s got a pretty cool structure as well, breaking down softly in the middle with a little flute action, only to crescendo back up and build the momentum as it ends and the team takes the field. Plus, because it’s the U.S. Army’s fight song, no one could knock it even if they wanted to, so it’s sitting pretty on this list.

When John Philips Sousa, the father of the American marching band, declares a song to be the “the greatest college fight song ever written”, you might want to listen to what the man has to say. Though it’s not as catchy as the final two entries on this list. This song still hearkens back to a time when guys were wearing suits and hats to football games and players played with leather helmets. At the same time, it never sounds dated and sounds as appropriate today as I’m sure it did back then. A true classic.

No surprise here. The first few bars of this song will get any college football fan drooling like Pavlov’s dog. The most prominent football team with (arguably) the richest history has a fight song that does the entire program justice. It’s been memorialized in Rudy, Knute Rockne All American, and every Saturday on national TV for decades. While it’s only the second best in this author’s opinion, it certainly carries more familiarity with it than any other song on the list.

Make way for the champs. Of this list anyway, despite the NCAA’s findings, I have not ruled USC ineligible for this list. And it’s a good thing, because their epic fight song easily gets the top spot. Its opening lacks the upbeat tempo of many of the more traditional songs, but what it lacks in pep, it more than makes up for in ominous tone. Halfway into the song, we get the more conventional upbeat tempo, but we are treated to something that sounds more like the Storm Troopers marching song in the beginning, which allows this song to score high on both the familiarity and intimidation factors.

(Editors Note: Screw that, ND and Michigan both have better songs than USC.)