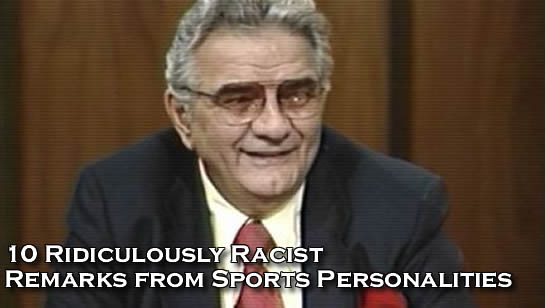 UPDATE: Everyone still says stupid stuff. And unfortunately, the fog of racism is still thick over professional sports. The good news, though, is that there’s always plenty of material for a list like this, and we’re obliging the trend by including a couple of bonus entries to go along with the 10 old ones. Congratulations, Donald Sterling, this is one list that you’re actually getting added to, rather than erased from.

Everyone says stupid stuff. However, when you’re in the public eye, you can expect that stupid stuff to echo around for a long, long time. Just ask Jessica Simpson. Well, silly comments or brief moments of stupidity are often made fun of, then quickly forgotten. But anything having to do with a social or political issue, regardless of context, always seems to have much more sticking power when it comes the public consciousness. While some of the people on the list have managed to weather the storm following their racial insensitivity, more than a few have not. So remember: no matter how epic your sporting career may have been, if you say something racist, there’s a decent chance that will be your legacy. Just look at these guys.

Ah, where do we even begin with Los Angeles Clippers owner Don Sterling? He was mysteriously caught on tape berating his much, much younger girlfriend over bringing black guys to Clippers games, and it just went terribly downhill from there. The result was a lifetime ban from the NBA, with further repercussions to come.

I’m actually surprised Marge Schott wasn’t on this list already, since her infamous comments while president of the Cincinnati Reds essentially made her the Donald Sterling of her day. She used some slurs that not even Sterling has been caught saying, and she went on to say that Hitler wasn’t actually so bad. 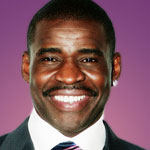 The noted loudmouth went on a national radio show in 2006 and had this to say about Cowboys quarterback Tony Romo – “He doesn’t look like he’s that type of an athlete. But he is. He is, man. I don’t know … some brother down in that line somewhere … I don’t know who saw what or where, his great-great-great-great-grandma ran over in the ‘hood or something went down.”

Looks like The Playmaker is wrong about a couple things here, not the least of which is that he refers to Tony Romo as a great athlete, which in and of itself should be grounds for at least suspension. 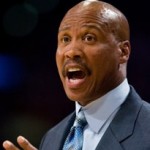 Well this almost certainly wasn’t intentional which affords us the opportunity to laugh at the gaffe. Here’s a casual press shot of Byron Scott doing something basketball-ish while donning this season’s must-have accessory: the swastika tie. How anyone involved with this photo shoot could let him get in front of a camera with that number boggles the mind, but it happened.

And if it WAS intentional? Then God help us all us from Byron Scott and his plans for a master race. 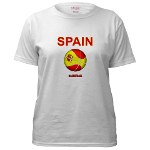 While not the most egregious example of racism on this list, this photo demonstrates both insensitivity to Asians and the fact that Spain keeps leading the discussion when people bring up the most racist sports fans in the world.

While this photo was taken for a sponsor of the Spanish basketball squad, I don’t really get the message. “We’re going to China! Let’s bust out slanty eyes like some 7 year-olds!” Whatever the intention was, the message that resonated was either that these guys are too stupid to realize this wasn’t clever or funny or that they were too insensitive to care. Not the best spot to be in. 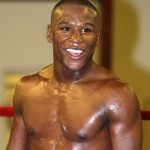 Not content to simply bob and weave his way to dodging a fight against Manny Pacquiao, two months ago, Floyd went on a bizarre video rant that was at once homophobic, ignorant, racist and completely devoid of charm. eferring to him as a “yellow chump” (I’m guessing not in the cowardly sense) and ordering that “motherfucker to make me a sushi roll and cook me some rice,” the real offense here is that a guy making approximately $75 billion per year doesn’t know that sushi comes from the Japan and not the Philippines.

One could argue that Floyd’s earlier escapades, like wearing a sombrero when fighting De La Hoya on Cinco de Mayo may have blurred the line between humor and good taste, but there’s no question after watching his homemade video. Dude’s racist. 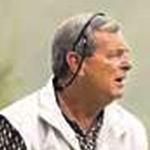 Golfers LOVE change. They are among the most progressive people in the world. So needless to say, when a 22 year-old athletic black phenom was raising hell and winning tournaments by double digit stroke leads, they were thrilled.

Leave it to some old white guy named Fuzzy to lead the welcome wagon for Tiger Woods. When Woods was running away with his first Masters in ’97, Zoeller had these kind words for him, “You pat him on the back and say congratulations and enjoy it and tell him not to serve fried chicken next year. Got it? Or collard greens or whatever the hell they serve.”

See ya at the Klan rally, Fuzz. 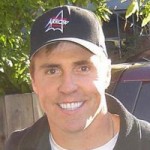 Romanowski’s alleged racial comments have all been delivered via second-hand sources, but his violent, pill-seeking behavior in the past has precluded us giving him the benefit of the doubt. He blinded a teammate, spat on J.J. Stokes and heaved a football at the crotch of Bryan Cox.

Apparently, Romanowski was trying to sell a teammate on PED’s because “It is the only way we can compete with the black guys.” Then the source claimed that Romanowski actually didn’t say “black guys” but rather dropped the n-bomb. Mike Shanahan has come to his defense saying that if he was a racist, he wouldn’t have been voted defensive captain three years in a row, but Romanowski’s past behavior indicates that this guy is capable of most anything, including racism. 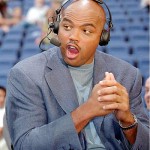 Because of Charles’ happy-go-lucky demeanor, he often gets away with saying some pretty garish stuff that would leave others crucified by the media. Having been somewhat outspoken on race issues in the past, he stepped up his game when it came to the discussion of black coaches in college football. He blasted Auburn for not hiring the black candidate, while further condemning Notre Dame for firing Tyrone Willingham, which I agree with, but not on the merits of race.

However, Charles Barkley’s shining racist comment hearkens back to a press conference when he was asked if he thought his team not getting calls was a racial issue, to which he responded (I’m paraphrasing. It’s been a while and I can’t find the original quote), “This is why I hate white people. You guys try to turn everything into a racial issue.” Says the guy with the white wife.

Because it was Chuck, the press conference erupted with laughter and the world kept on spinning. However, if the races had been reversed, I think we would have seen a very different outcome for the perpetrator. 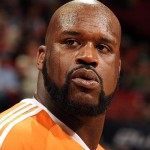 In what’s perhaps the least threatening, but most childish act of racial insensitivity on this list, Shaq was interviewed by Fox Sports in 2002 and asked if he had any words for upstart Chinese center Yao Ming. To which Shaq intellectually replied, “Tell [NBA center] Yao Ming, ‘Ching-chong-yang-wah-ah-so.”

No word at press time if Yao had received the message. 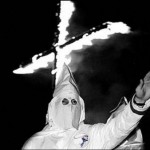 Haven’t heard of this guy? Good. Most of America hasn’t. However, he made a minor splash earlier in 2010 by presenting plans for a “whites-only” basketball league. He obviously ruffled some feathers with these plans, so he decided to cover his ass by declaring, “There’s nothing hatred [sic] about what we’re doing. I don’t hate anyone of color. But people of white, American-born citizens are in the minority now. Here’s a league for white players to play fundamental basketball, which they like.”

First of all, Moose, there’s a lot “hatred” about what you’re hatching. Secondly, if you want to gauge the depth of the market for fans of fundamental basketball check out the attendance numbers for the WNBA. Then try to get investors for your experiment. 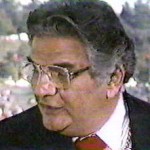 This sports personality’s legacy was tainted by perhaps the most iconic racist statement in the history of sport. Conveyed to a TV reporter, Jimmy Snyder said:

“The black is a better athlete to begin with because he’s been bred to be that way — because of his high thighs and big thighs that goes up into his back, and they can jump higher and run faster because of their bigger thighs. This goes back all the way to the Civil War when during the slave trading, the owner — the slave owner would breed his big black to his big woman so that he could have a big black kid.”

And that was pretty much the end of the famed handicapper’s career. Beyond that tone statement, there was little evidence that Snyder harbored any racist sentiments, but, in light of the fact that he was a public figure representing a TV station, it should come as no surprise that the network did what they did.