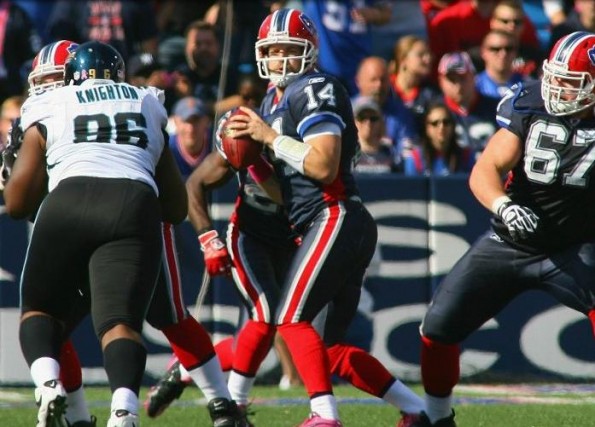 It appears as though the NFL’s adjustment to rules regarding hits to the head has worked.  Fantasy owners were treated to a week that did not see many, if any, receivers or running backs go down with serious injuries.  However, the quarterbacks still appear to be dropping like flies.  Here is an interesting stat for you all.  In the past two Monday night games, three of the four starting quarterbacks have left the game with an injury.  And here is another stat for you.  The Giants have knocked five quarterbacks out of the game thus far this season.

So with that being said, perhaps you should stay away from quarterbacks who are starting on Monday night or playing against the Giants.  Or maybe not (this Monday’s game features Peyton Manning vs. Matt Schaub).  Here are some guys you may want to target on your fantasy league’s waiver wire.

Ryan Fitzpatrick, QB, BUF – Wondering just how good Ryan Fitzpatrick has been since taking over the starting duties for the Bills?  Through those four games he has recorded 969 yards, 11 touchdowns and four interceptions, and he currently has me contemplating starting him over Tom Brady in one of my leagues.  Seems crazy, but he has recorded 18, 24, 26 and 36 fantasy points (in standard scoring leagues) over the course of his four starts and with the Bills expected to be trailing often this season, look for Fitzpatrick to be airing out the pigskin week in and week out.

Matthew Stafford, QB, DET – Shaun Hill was solid in place of Matthew Stafford, but now that the Lions former first-overall pick is back, he appears to be a great addition to any fantasy football team.  If Shaun Hill can turn himself into a top ten fantasy quarterback with the Lions’ offensive weapons around him (and believe it or not, he was putting up top 10 points at his position), just imagine what Stafford can do.  If he was dropped in your league, you may want to pick him up now before it is too late.  He is expected to return in week 8 with Detroit coming off their bye.

Jon Kitna, QB, DAL – Kitna didn’t look all that good in his first couple drives after coming in for an injured Tony Romo, but he did settle in late, recording 187 yards and two touchdowns in just over one half of football.  He may not be able to duplicate Romo’s numbers, but with a talented receiving corps, Kitna is capable of putting up some decent stats.  If you are in need of a quarterback, he may be a serviceable acquisition for you.

LeGarrette Blount, RB, TB – It has been hard to predict what we should expect from Blount in recent weeks as he gave us an impressive showing against the Steelers before being shut out the next week, and deactivated the week after that.  But he was able to follow that up with a solid 11 carries for 72 yards against the Rams in week 7, and suddenly it appears as though Blount could be the go-to guy in the Bucs’ backfield.  That makes him well worth the roster spot for anyone in need of a running back.

Steve Johnson, WR, BUF – As Ryan Fitzpatrick has flourished, so too has Steve Johnson.  The 3rd-year wide receiver has scored a touchdown in four consecutive weeks, with his most impressive performance coming in week 7 against the Ravens as he went off for 158 yards and a touchdown.  He may not be the biggest name at the wide receiver position, but he seems to have built some chemistry with Fitzpatrick.  Look for Johnson to continue to be a top target in the Bills’ passing game.