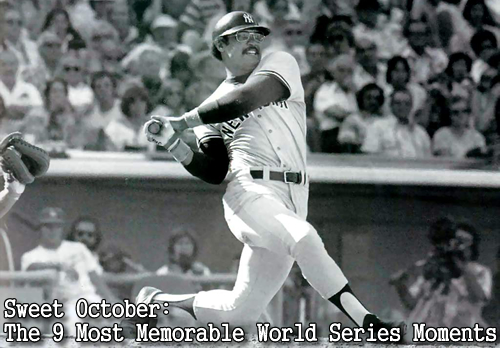 Rather than consisting of a constant flow of players moving up and down a basketball court or hockey rink, baseball’s roots are situational, with the memorable moments being defined not so much by the actions themselves as they are by the anticipation of the moment and the moments leading up to it. This has long been a criticism of the sport, but there is a flip side to the detractors’ argument. During a high-tension game, especially come October, those moments hang in the air for a lifetime. They share company with assassinations and war declarations in that their recollections are often prefaced with “Where were you when…?” They are unique in a fashion that no other sport can replicate, and every year we hold out hope that we’ll be privy to another such moment. In anticipation of Game 1 of the 2010 World Series, here are 9 such moments, recent and distant.

In one swing of the bat, Joe Carter’s legacy transformed from “perennial All-Star” to “World Series Hero.” Up 3 games to 2 over Philly, the Jays were losing 6-5 when Carter stepped up to the plate with one out and the always-threatening Ricky Henderson and not-very-threatening Paul Molitor on base. With the count 2-2, Joe cranked it out of the park, becoming only the second player ever to win the World Series with a walk-off home run, a feeling that is probably unrivaled in the world of sports.

Perhaps the second most iconic World Series moment in the past 30 years, this one had underdogs on a two different levels. First, the Dodgers were trailing Game 1 4-3 in the 9th, setting the stage for a memorable comeback should the Dodgers pull off the W. However, add the fact that Kirk Gibson was suffering from two(!) leg injuries and a stomach virus, and you’ve got a Disney feel-good sports movie in the making. Of course, Gibson wouldn’t be on this list if he didn’t deliver. With two outs and a man on first, Gibson cracked a 3-2 slider over the right field wall to hand Game 1 to the Dodgers 5-4 on their way to a 4-1 World Series victory.

There are complete games, there are no-hitters, there are perfect games, then there are perfect games in the World Series, which would be the royal flush of baseball pitching accomplishments. Add to the magnitude of the accomplishment the cast of characters involved (Larsen himself, Yogi Berra, Jackie Robinson, Pee-Wee Reese, Mickey Mantle, Gil Hodges, Casey Stengel, Whitey Ford, and legendary play-by-play man Vin Scully) and this game had all the trappings of a legend regardless of the pitching achievements. There have been 20 perfect games in baseball history. The fact that Larsen was able to toss one of them in game five against the best-of-the-best Dodgers after getting shellacked in game two shows not only unshakable poise, but superhuman ability, as well.

Bill Mazeroski’s accomplishment gets overlooked in the annals of World Series history because a) he wasn’t as big a name as many of the other players on this list, save for maybe Kirk Gibson, and b) it was a long time ago, and memories tend to fade, especially when they’re memories created by a player like Bill Mazeroski. However, that ends now. Stepping up to the plate in the bottom of the ninth of game seven, he cracked a solo shot that became the first-ever home run to end the World Series. This feat would be equaled by Joe Carter, who actually ended the series with a home run in game six, but that one day in October 1960, Bill’s home run gave immense pride to the other 14 people in the world with the last name “Mazeroski.”

In game six of the 1977 World Series against the Dodgers, Reggie Jackson demanded he be given a nickname for his postseason exploits, not through words, but through actions. He cranked three home runs (all off of the first pitch, each one off a different pitcher). This after he homered in games 4 and 5 as well. With this distinction, he was crowned World Series MVP, the first player to have the honor bestowed upon him for two different teams. Needless to say, the Yanks took the crown thanks to Jackson’s silver swing and Reggie retired as Mr. October, having hit 10 home runs in an astonishing 27 World Series games, also amassing 24 RBI’s and a .357 average. Mr. October, indeed.

In the bottom of the 12th inning of game six of the 1975 World Series between the Red Sox and the Reds, Carlton Fisk hit home run to give the Red Sox a 7-6 victory. Those are the dry facts. Ultimately, game seven was won by the Reds, giving them the crown. However, through a fluke, the image of Carlton Fisk waving the ball fair as it shot down the left field line is one of the most enduring images of the sport. The cameraman had been instructed to follow the ball, not the player, but one cameraman had been distracted by a rat running nearby and was unable to follow the ball’s path, forcing him to cover Fisk’s reaction. With the drama that Fisk brought to the moment, cameramen duties are now split with at least one always tracking the player’s reaction, for reasons that are totally understandable.

When your accomplishment is simply known through the ages as “The ______”, you probably did something right. And Mays did something very, very right with “The Catch.” With the score tied 2-2 in the top of the 8th of the World Series, Vic Wertz cracked a deep fly to center field of the Polo Grounds, an infamously deep ballpark. In many parks, this fly would have been a homer, but as it was, the lightning-fast Mays was able to fly back and make a characteristic over-the-shoulder snag. A strong-armed throw to nail the tagging basemen at first and second was unnecessary, as they had gone ahead without tagging, having assumed the ball was out of Mays’ reach. Whoops. The runner on second was only able to get to third after sprinting back to retag and was left stranded on third. The Giants took the game and the series, and Mays solidified himself as perhaps the best defensive center-fielder of all-time.

The fact that this moment is shrouded in mystery only adds to the legacy. In this writer’s opinion, there isn’t much room for discussion. He stood up to the plate, pointed to the center field bleachers, then hit a home run to the center-field bleachers. The man is Babe Ruth, and he has earned the benefit of the doubt. If this was Ruben Sierra, then yes, maybe we would require Zapruder-like analysis, but Ruth has earned this much faith from baseball fans.

As for the play, it was the fifth inning of game three of the 1932 World Series. The Yanks were up 2-0 in the series. Ruth hit his homer to take the Yanks up 6-5 in the game, then Gehrig followed up with a solo shot to seal the game at 7-5. The next day, the Yanks completed the sweep and took home the title and one of the best legends in all of sports.

Detailing this play is a little like giving an introduction to Muhammad Ali. He missed a ground ball that cost the Red Sox the World Series. Sort of. Many casual fans don’t realize that this play took place at the end of game six, allowing the Mets to tie it up and win game seven. What most fans remember is Buckner charging Mookie Wilson’s grounder, allowing the ball to roll under and, consequently, the winning Meets run to score. If he fields that ball properly, the Sox keep going in extra innings as their two-run lead in the tenth had been matched by the Mets courtesy of three two-out singles, so it’s just as arbitrary to say that the Sox pitching got them in this jam and Buckner failed to get them out. This gravity of this moment has been diminished somewhat by Boston’s two recent Championships, much to Buckner’s delight, I’m sure.