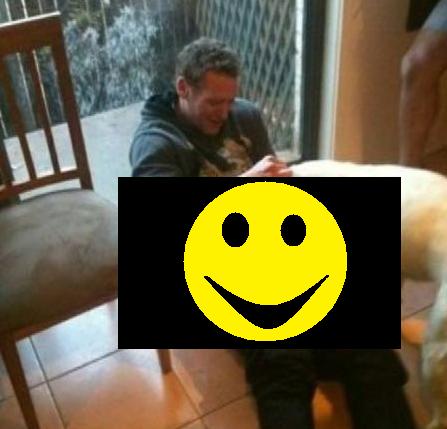 Sex acts are all the rage in sports these days.  It seems like the exposure an athlete can gain from any sort of sex scandal is much greater than the recognition one would receive after breaking a record, or winning a championship.  Just ask Tiger Woods and Brett Favre.

But these two popular North American athletes aren’t the only ones letting their penises do the talking for them.  Australian rugby star Joel Monaghan has also gotten in on the fun, although, in a rather unorthodox way.  While both Woods and Favre preferred the company of women, Monaghan decided to give a whole new meaning to the idea of “dog as man’s best friend.”

As the story goes, Joel was simply playing a prank on an absent teammate by simulating an act of beastiality during the Canberra Raiders’ (Joel’s team) end-of-season party.  Alcohol is believed to have fueled the incident, which is said to have traumatized Monaghan following the spread of the photos through various social media networks.

Monaghan has since released a statement of apology through his manager, Jim Banaghan, but perhaps the only way to really get past this whole ordeal is to send a few dong pics to some females and engage in some pure unadulterated sex with many mistresses.