>Total Pro Sports
More
Brought to You By: The 9 Lamest NASCAR Sponsors

Brought to You By: The 9 Lamest NASCAR Sponsors 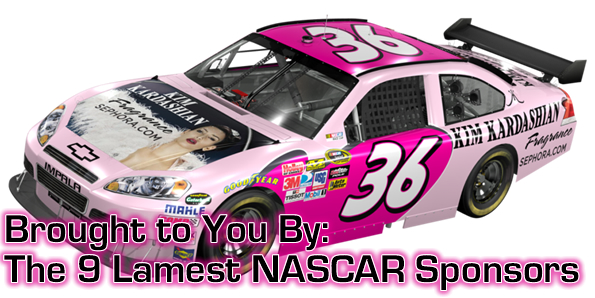 In the world of sports, sponsorship is inherently lame. It reduces the efforts of the participants to figures and cheapens everything from the stadiums to the fields on which they play. But no one embraces the ethos of sponsorship quite like NASCAR. And they do not discriminate. Nothing is too tacky or inappropriate to slap on the hood of a car for people to stare at for four hours. Raised eyebrows can be found as these “synergies” round every turn, so with that in mind, let’s visit 9 of the most egregious sponsor partnerships in the world of stock car racing. 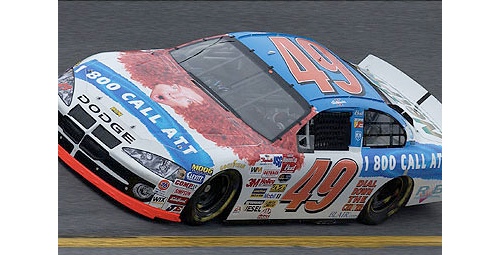 I challenge anyone, including Carrot Top himself, to tell me that this isn’t one of the five worst images you could put on a car. The heyday of collect calling has come and gone, but the grim visage of Carrot Top staring with those demented eyes will remain with us until our deaths. It’s enough to turn us off of not only AT&T, but also comedy, NASCAR, and quite possibly, life. If you’re going to put a plastic surgery train wreck on the hood of a vehicle, it should at the very least be Joan Rivers or the late Michael Jackson. 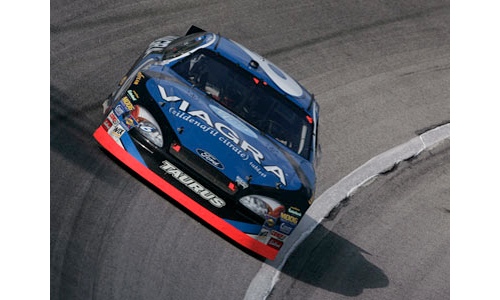 It’s pretty easy to fall into a Jay Leno-like routine when discussing the merits of the little blue pill and its sponsorship of a 40 year-old driver. Apparently, the racing team and sponsor thought the marriage was pretty lame as well, as they went their separate ways in 2004. Stick with rich golfers, Viagra. 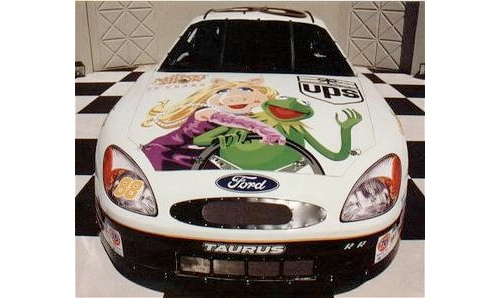 Someone , somewhere thought this was a good idea. The Muppet Show was celebrating its 25th anniversary, and for some reason, this needed to be commemorate by having the likenesses of Ms. Piggy, Kermit, Animal, et al gracing the hoods of several drivers’ cars for the Tropicana 400 in 2002. However, a dispute with the promotion team kept all the life-size characters out of the event and resulted in one of the biggest promotional disasters in NASCAR history. Which it probably would have been even if the characters had been let in. 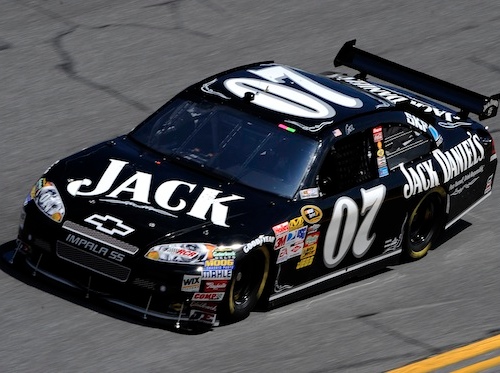 JD and motorsports, a match made in heaven. NASCAR had long banned hard liquor from sponsorship opportunities for obvious reasons. The financial benefits of having a sport that hinges on driving fast connoted with something that provides a healthy buzz is probably not the image they are going for. (Though they do it with beer, so what the hell do I know?) Well, after a while, NASCAR found that (with the “suggestion” of the FDA) the upside didn’t outweigh the downside and sent the Jack, Jim, and Crown cars packing. 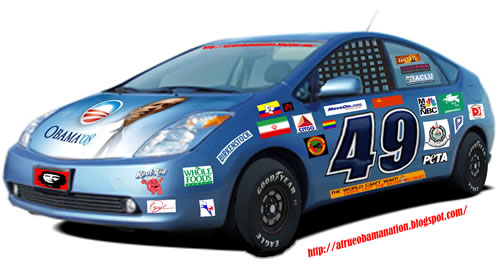 Sadly, no photo is available of the “Hope” car because the idea never made it past the brainstorming phase. The Obama and NASCAR support bases overlap about as little as a sponsor and NASCAR could, but perhaps that was the idea. Opening a candidate up to a new voter bloc isn’t the worst idea in the world, but in the cutthroat world of NASCAR, can a presidential candidate afford to tie their name to a car that blows out a tire in 4th, 16th, and 74th lap? If the car placed anything but #1, Obama’s name would be synonymous with “loser.” Campaigns are hard enough without having to manage a stock car team. 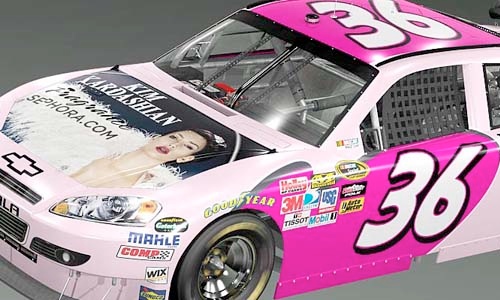 To be fair, Kim Kardashian was actually just the spokesperson for Sephora in the sponsorship, but the paint job made it appear that Kim was simply trying to get a whole new group of people to keep up with her. For years now, old-school Hollywood glamor and NASCAR have been synonymous, so it’s only natural that Sephora would paint a car pink and put Kim’s mug on it. I pray that no woman was watching the race, saying to herself, “I wanna look like the girl on the hood of that stock car,” but I know better. There were probably thousands of women saying that. 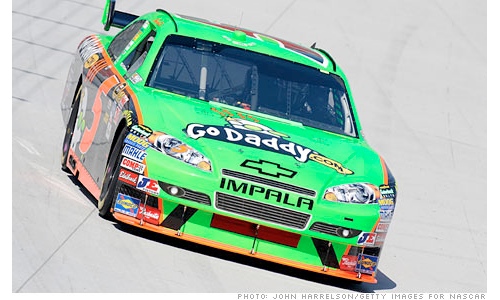 In the whorish world of NASCAR sponsorship, even the most jaded of observers view the relationship as particularly sleazy. The desperately sexual Super Bowl ads seem to have zero to do with website registration, but the fact that Go Daddy keeps going back to the well indicates that they’re doing something right. The sponsorship of Danica Patrick’s car inherently opens a company up to more scrutiny than they would sponsoring an average driver. While the trashy positioning seems to be working for Go Daddy, it doesn’t mean that it’s seen as tasteful. 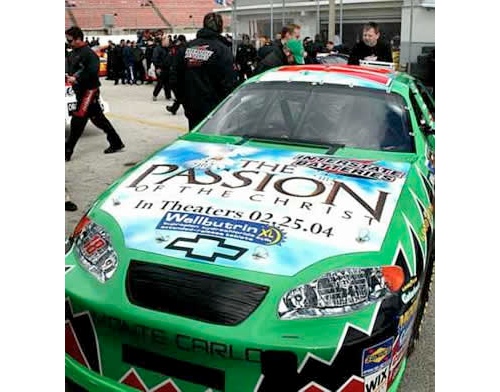 File this one under “tasteful synergies.” The film became one of the highest-grossing in history through a grassroots marketing campaign led by churches and their congregations. Apparently, “grassroots” also includes NASCAR sponsorships. At the end of the day, it’s just an ad for a movie, but it’s just weird to see a reference to the torture and execution of the son of God plastered on Bobby LaBonte’s car. I’m waiting for the “Islam Fever: Catch It!” car to run in the Sprint Cup next season. 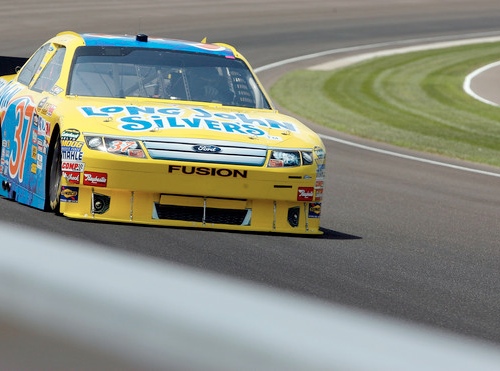 The purest “lame sponsor” entry on this list. Long John Silver’s is just…just awful. You could paint LJS’ logo on the side of Air Force 1, and I still wouldn’t be inclined to eat whatever it is they try to pass for seafood. But, of course, I’m not everyone. In my mind, Kvapil gets paid in fried fish platters that he consumes with reckless abandon, 3-5 times a day. I don’t want to presume much about NASCAR enthusiasts (well, I do, but I’m not going to), but I know they’re loyal to their driver’s sponsors, so I pity the young scamp who idolizes Mr. Kvapil, eating plate after plate of those little fried BB’s that sit under every LJS meal, soaking up grease and “fish” juice. Gross.