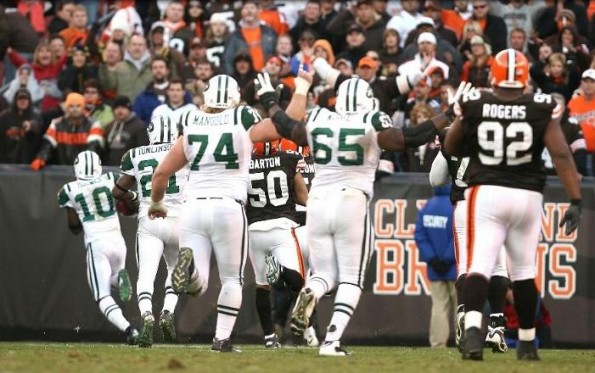 The Bills finally won their first game of the season!

And now that we have that piece of news out of the way, I would like to talk about New York Jets wide receiver Santonio Holmes for a second.  Do players get any more clutch than this guy?  His two big receptions in the past two weeks have not only helped the Jets become the first team in NFL history to win an overtime game on the road in back-to-back weeks, but they have also helped him continue to build upon his reputation as one of the NFL’s best wide receivers in the clutch.  First their was his week nine 52-yard reception which helped set up the game-winning field goal in overtime against the Detroit Lions.  Then, just one week later, with time running down in overtime against the Cleveland Browns, he caught a pass from Mark Sanchez and busted it loose for a game-winning 37-yard touchdown reception.

And don’t even get us started on his MVP performance during Super Bowl XLIII, when he hauled in nine passes for 131 yards, including the game-winning touchdown with only 35 seconds left in regulation while playing with the Pittsburgh Steelers.  He may not be the best receiver out there, but he is certainly among the best in the clutch.  However, the only thing fantasy owners are interested in finding out is just how clutch he can be during the fantasy football playoffs.  Only time will tell.

Here is a look at what happened during week ten in this edition of the TPS Monday NFL Fantasy Rewind.

Baltimore 21 at Atlanta 26 – Not a bad way to kick off this year’s edition of Thursday Night Football.

Detroit 12 at Buffalo 14 – Don’t be surprised to see Fred Jackson emerge as a strong fantasy running back during the second half of the season.

New York Jets 26 at Cleveland 20 (OT) – Shonn Greene had 20 carries to LaDainian Tomlinson’s 18.  Could there be a changing of the guard in New York?

Cincinnati 17 at Indianapolis 23 – With 7 receptions for 86 yards and a touchdown, will Chad Ochocinco finally stop whining about all the double-teams?

Houston 24 at Jacksonville 31 – It only seems appropriate that this air-show ended the way it did.

Carolina 16 at Tampa Bay 31 -Well they lost yet again, but it appears as though the Panthers finally got their running game going, thanks to Mike Goodson.

Seattle 36 at Arizona 18 – In a game featuring Larry Fitzgerald, the Seahawks’ Mike Williams appeared to be the best receiver on the field for either team.

Dallas 33 at New York 20 – Nothing sums up this year’s NFL season quite like watching the struggling Cowboys man-handle a Giants team that many thought was the best the NFC had to offer.

St. Louis 20 at San Francisco 23 (OT) – Could Troy Smith be the key to a seemingly improbable late playoff run for the 49ers?

New England 39 at Pittsburgh 26 – Even after watching his recent struggles, should we really be surprised to see Tom Brady pick apart the Steelers defense?