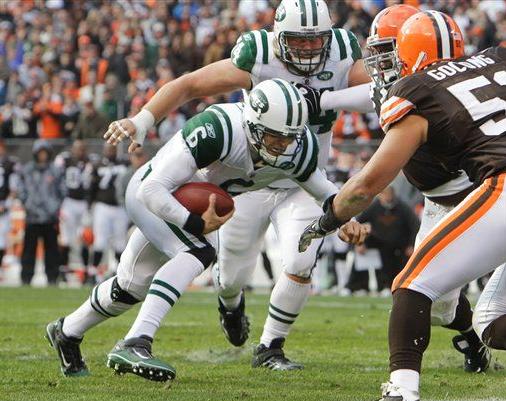 Start’em: Mark Sanchez vs. HOU – Mark Sanchez has been rather hot over the course of his last two games, putting up 23 and 27 fantasy points in each, respectively.  Now he will face a Texans team that has given up an embarrassing 301 passing yards against per game and 22 passing touchdowns through nine games.  Look for Sanchez to easily surpass the 20-point mark in standard scoring leagues as he should be one of the top fantasy quarterbacks this weekend.

Sit’em: Brett Favre vs. GB – We had Favre in this spot last week and he proved us right with an embarrassing one touchdown, three interceptions, and one lost fumble against the Bears.  Don’t expect much better on Sunday against the Packers, who have allowed only nine touchdowns against through the air, while recording an impressive 14 interceptions through nine games.  To make matters worse, in his last game against his former team, Favre threw for 212 yards, one touchdown, and three interceptions.  And that was when he had Randy Moss, and a healthier Percy Harvin.

Other QB sit’ems worth noting: Matt Hasselbeck vs. NO, Ryan Fitzpatrick vs. CIN, Donovan McNabb vs. TEN

Start’em: Jamaal Charles vs. ARI – While both Chiefs running backs should put up solid numbers this weekend, Charles has been the better of the two in recent weeks, and therefore gets his name in this slot.  He has recorded over 100 total yards in each of his last two games, and should surpass that total once again against a Cardinals team that has allowed an average of 132.4 yards against per game on the ground.

Sit’em: Darren McFadden vs. PIT – While the Steelers defense may not be invincible, as Tom Brady and the Pats proved last Sunday night, their run defense is still the best in the league.  They have given up only 63 yards per game and four total touchdowns against on the ground.  Don’t expect McFadden to find much room against them on Sunday.

Start’em: Dwayne Bowe vs. ARI – Bowe has officially gone from fantasy cast-away to fantasy stud.  He has recorded a touchdown in each of his last five games, and in three of those contests he scored at least two touchdowns.  Now he will take on a Cardinals defense that has allowed 14 passing touchdowns against in nine games and currently ranks 27th in the league against the pass.  Look for Bowe to once again find the end zone as he continues his stellar play.

Sit’em: Andre Johnson vs. NYJ – Can you actually bench Andre Johnson?  It may be hard, but it is probably equally difficult to start a wide receiver that you know will be lining up against Jets’ corner Darrelle Revis the entire afternoon.  In their last meeting, Johnson managed only four receptions for 36 yards and no touchdowns.  Don’t expect much more this time around.

Other WR sit’ems worth noting: Brandon Marshall vs. CHI, Steve Smith vs. BAL, Mike Williams vs. NO

Start’em: Dustin Keller vs. HOU – After a hot start to the season that saw him score five touchdowns in his first four games, Keller has slowed down dramatically, scoring zero in his next five games.  Look for him to break that trend against a Texans team that is worst in the league against the pass.

Sit’em: Visanthe Shiancoe vs. GB – Owners continue to wait for Shiancoe to regain his 2009 form, but don’t hold your breath.  He and his quarterback have struggled thus far through nine games in 2010, and with the Packers up next, it doesn’t appear as though his struggles will come to an end.

Start’em: Ryan Succop vs. ARI – The Chiefs should be able to move the ball at will against a soft Arizona defense.  That should set up Succop for plenty of field goal opportunities against a Cards team that has given up more fantasy points to kickers than any other team in the league.

Sit’em: Josh Brown vs. ATL – Yes, Josh Brown will be kicking indoors, but he will be up against a Falcons team that has allowed the fewest points against in the league to opposing kickers.  Look for him to have a quiet afternoon in the dome.

Start’em: Ravens vs. CAR – The Ravens defense has been rather disappointing from a fantasy perspective thus far this season, but they could change that on Sunday against the Panthers, who may be forced to start third string quarterback Tony Pike.

Sit’em: Giants vs. PHI – The Giants defense has been strong all year thus far, but they will have their hands full against Michael Vick and the Philadelphia Eagles.  Not only is Vick hard to sack, but he has yet to thrown an interception thus far this season.