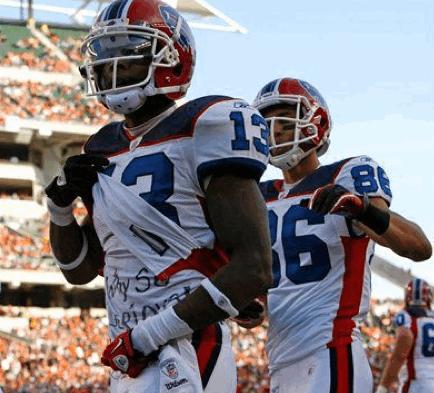 What a weekend it was in the NFL!

Although the Chicago Bears and the Miami Dolphins’ Thursday night battle would prove to be one of the worst games of the season, it was clearly not an indication of what we should come to expect from the remainder of the week 11 schedule.  Sunday’s slate of games were nothing short of amazing.  First there was the Bills, who followed up their first win of the season with an amazing come-from-behind 49-31 victory over the Cincinnati Bengals after trailing by 21 points late in the first half.  NFL fans were also treated to yet another great performance in the clutch from New York Jets receiver Santonio Holmes, whose last-minute touchdown led the Jets to yet another improbable late-game victory (and dealt the Texans yet another crushing late-game defeat).  And then there was the “game of the week” between the Patriots and the Colts, which for a moment appeared as though it would end up much like last year’s meeting, which saw the Colts come back to defeat the Patriots after trailing 31-14 early in the fourth quarter.  However, a James Sanders interception on the Colts final drive would help the Patriots hold onto the 31-28 victory this time around.

Those were just a few of the many highlights that marked an extremely exciting week 11 in the NFL.  Here is a look at what happened in this edition of the TPS Monday NFL Fantasy Rewind.

Chicago 16 at Miami 0 – The real loser in this game was anyone who was forced to watch it.

Baltimore 37 at Carolina 13 – Just when it appeared as though Brian St. Pierre had led his team back into the game, he throws two interceptions for touchdowns to seal the Panthers’ fate.

Buffalo 49 at Cincinnati 31 – Manning to Harrison, Young to Rice, Kelly to Reid…Fitzpatrick to Johnson???

Detroit 19 at Dallas 35 – Looks like Jon Kitna learned a little something after watching Michale Vick’s Monday night performance in week 10.

Cleveland 20 at Jacksonville 24 – After a slow start to the season, Jones-Drew has now recorded over 100 rushing yards in each of his last three games.

Arizona 13 at Kansas City 31 – Something tells me that Jamaal Charles owners couldn’t be more disappointed to see their star running back take the Chiefs to the opposition’s goal line, before watching Thomas Jones steal his thunder…twice!

Green Bay 31 at Minnesota 3 -I am going to go out on a limb and guess that the Vikings game plan did not mention anything about covering Greg Jennings.

Houston 27 at New York Jets 30 -This ending pretty much sums up how things have gone for both teams thus far this season.

Washington 19 at Tennessee 16 (OT) – I recall Moss being traded to the Titans, but can anyone tell me if he has played a game yet?

Seattle 19 at New Orleans 34 – Brees is back.  And so too are the defending Super Bowl Champion Saints.

Tampa Bay 21 at San Francisco 0 – Looks like the honeymoon is over for Troy Smith.

Atlanta 34 at St. Louis 17 – The Falcons continue to sit on top of the NFC standings, but no one seems to notice.

Indianapolis 28 at New England 31 – When these two teams meet, they never seem to disappoint.