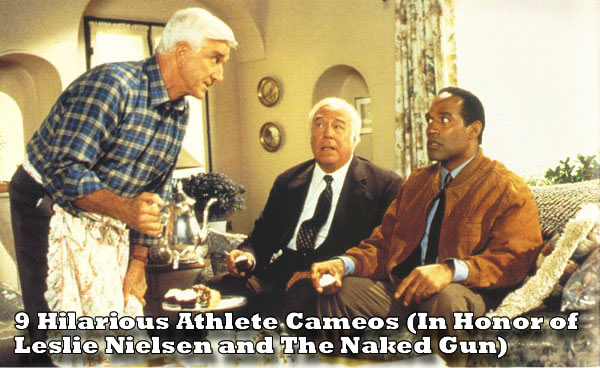 As you probably already know, actor Leslie Nielsen died yesterday at the age of 84. To quote Doug Benson, “I’m gonna run around Disneyland yelling, “Leslie Nielsen is dead!” And then we’ll see if it’s the happiest place on Earth.”

Although his career spanned 60 years, the actor will forever be known for his work on The Naked Gun series, which co-starred NFL great and suspected murderer OJ Simpson. This is a sports site, so we can’t exactly just launch into a tribute featuring Nielsen’s movies. But we can put together this list of famous sports cameos in comedy films. It’s a stretch, but under the circumstances, it’s the best we can do. RIP Leslie. Shirley, you will be missed.

9. Roger Clemens – Kingpin
Like the Zucker Brothers (Airplane, The Naked Gun), the Farrelly Brothers love to pepper their films with athletes. This explains Roger Clemens’ brief role in Kingpin. Although in all fairness, his later role as a steroid using adulterer was funnier.

8. Cam Neely – Dumb and Dumber
If you don’t know Cam Neely as an NHL hockey great, chances are, you know him as a truck-driving anal-rapist from the film Dumb & Dumber. The character he played, Sea Bass, is very similar to the character Roger Clemens played in Kingpin, probably because it was also written by the Farrelly Brothers.

7. Kareem Abdul-Jabbar – Airplane
Everyone knows that Leslie Nielsen starred with OJ in The Naked Gun films, but people shouldn’t forget that Kareem Abdul-Jabbar also starred with Nielsen in the classic comedy, Airplane. Jabbar played an ordinary pilot named Roger Murdock. However, “Murdock” becomes extremely upset if you badmouth Jabbar’s work ethic, for no apparent reason. He’s was also seen to be wearing Lakers’ shorts under his pilot uniform. 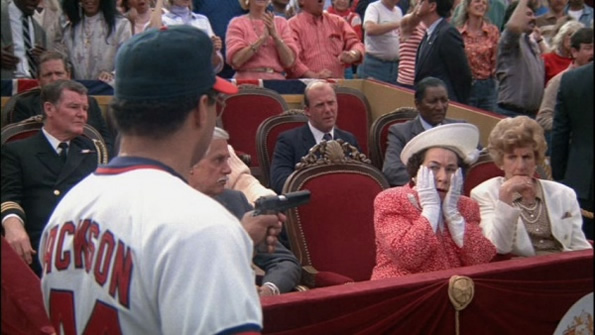 O.J. Steals the show in The Naked Gun, but he’s not the only athlete to make an appearance. Mr. October himself, Reggie Jackson, also has a cameo. Although it is a pivotal role, I doubt he had trouble learning his lines…or should I say line. “I must kill…the queen.”

5. Dan Marino – Ace Ventura: Pet Detective
Ace Ventura is by by far my favorite Dolphin kidnapping film with a transgender villain. The fact that Hall-of-Fame QB Dan Marino has a cameo is the icing on the cake. Laces out, Dan!

2. Orenthal James Simpson – The Naked Gun Trilogy
When it comes to athlete cameos, OJ Simpson is probably the most famous, or infamous, example. Although he was never convicted, almost everyone agrees he was responsible for killing his ex-wife and he “friend” back in 1994. He also kills at slapstick comedy.

1. Mike Tyson – The Hangover
Tyson’s role as himself in The Hangover is one of the most recent entries on the list, and arguably the funniest. After all, there’s something special about seeing a convicted rapist jam out to Phil Collins. Also, the face tattoo is always hilarious.