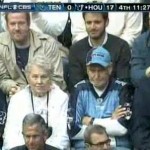 Cortland Finnegan wasn’t the only Tennessee Titan getting beat up by the Houston Texans yesterday afternoon.  Rookie quarterback Rusty Smith was also on the receiving end of a rather harsh ass-kicking.  Although his came in the form of three interceptions, rather than a few punches to the face.

On the winning side of that battle was Glover Quin.  The Texans’ corner was on the receiving end of all three of Smith’s interceptions, the second of which had Rusty’s grandpa shaking his head in disapproval.

Poor grandpa Smith.  He looks like he would rather be at home watching reruns of Matlock than at Reliant Stadium witnessing Rusty put up zero points and three picks against the league’s worst pass defense.