The Most Violent Soccer Goal Celebration Ever? (Video) 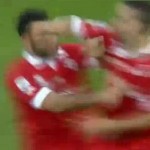 Soccer goal celebrations are supposed to be a time when teammates can get together and bask in the glory of their accomplishment by either exchanging some friendly taps and shakes, or by putting together some choreographed moves for the fans.  But in Italy, it appears as though they have their own way of doing things.

Forget about the giant love-fest that typically ensues following a goal in soccer.  Bari’s Francesco Caputo just wants to let out some rage.  And he did just that following the equalizing goal against Cesena on Sunday by punching Emmanuel Rivas (who had just finished setting him up for the goal) directly in the face.

And as you would expect, Rivas refused to pass Caputo the ball for the remainder of the game.