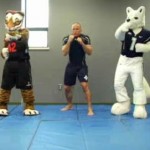 Mascots are not safe from anyone.  Not fans.  Not police.  Not even other mascots!

It appears as though their only option at this point is to learn how to defend themselves.  The UConn Husky and the Princeton Tiger have decided to do just that, and they hired the perfect trainer for the job, Georges St. Pierre.  The reigning UFC Welterweight Champion is fresh off an impressive showing on season 12 of “The Ultimate Fighter,” where his team dominated Josh Koscheck’s and eventually represented both spots in the finale.

Now GSP will finally get his opportunity to shut Koscheck up and he will be looking to do so quickly, but before stepping into the octagon on Saturday, December 11th at UFC 124 in Montreal, Canada, he stopped by the gym to give the Tiger and the Husky a first-class lesson in mixed martial arts.