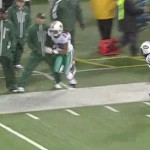 When your players can’t get the job done, sometimes the coaches must step in and take complete control of the situation.  That was likely the thought process going on through the head of New York Jets strength and conditioning coach Sal Alosi during a Miami Dolphins punt in the third quarter of yesterday’s game.

The Jets have had their fair share of problems on special teams while playing the Miami Dolphins in the past.  Most notable was a game back on November 1, 2009 in New York that saw the Dolphins accumulate only 104 yards of total offense, but still win the game by a score of 30-25 thanks to two 100+ yard kickoff returns by Ted Ginn Jr.

That thought must have been stirring through the mind of Alosi when he decided to trip Dolphins corner and punt coverage man Nolan Carroll, who was injured on the play and remained on the ground for several minutes before walking back over to the sidelines. Carroll was able to return in the fourth quarter and finish off the game.  As for Alosi, he apologized to Carroll and Dolphins coach Tony Sparano following the game, as well as Jets coach Rex Ryan, general manager Mike Tannenbaum and owner Woody Johnson.

The incident is currently being investigated by the league and the Jets organization, and we can only expect that a rather significant fine, at the very least, will come out of this.  Here is another look at what took place along the Jets’ sideline.