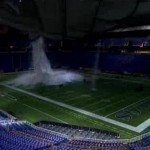 Most football fans have likely heard about what transpired at the Metrodome Sunday morning, but for those who found themselves flipping through their NFL Sunday Ticket television package in search of the New York Giants vs. Minnesota Vikings game yesterday afternoon, here is a video that should help explain why that game was canceled and moved to Monday night at Ford Field in Detroit.

We aren’t sure if leaving the cameras on all night is part of the regular procedure for FOX prior to football games, but they did so in this case and we couldn’t have been more thankful as they were able to capture some rather remarkable footage of the Metrodome roof collapsing onto the playing field.  Luckily this happened prior to the game, and not during it.

Here is the footage taken from inside the Metrodome during the collapse.