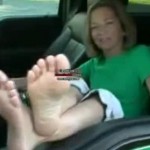 Prior to their week 13 game against the New England Patriots, New York Jets head coach Rex Ryan talked about the many similarities he shared with Pats’ quarterback Tom Brady.  Among those similarities pointed out by Rex were their good looks and supermodel wives.  However, one similarity that these two do not appear to share is a love for feet.

As you will see in the video below, an older couple took some time out of their busy schedule to indulge in their love for feet, and they recorded the entire thing.  And while this would be nothing out of the ordinary for most couples, things took a strange turn when it was suggested that the female in the clip appears to be Michelle Ryan, while the man taping the entire scene sounds a lot like Rex.

It is tough to confirm with 100% certainty whether this is in fact Rex Ryan and his wife, but I am having a hard time believe it isn’t.