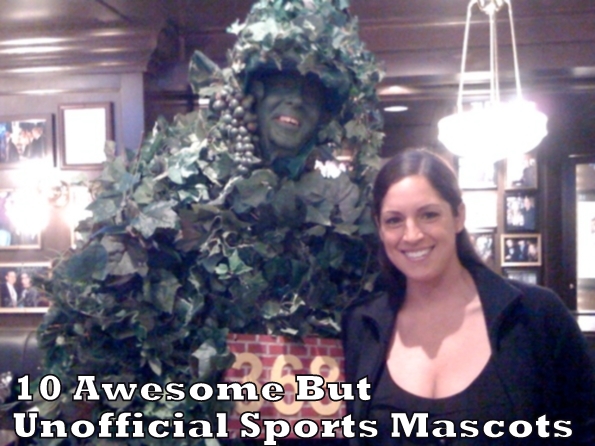 Recently, it’s been a bad time to be an unofficial mascot. Half of the guys on this list have passed away in the past three years, and that’s not even counting the Hogettes, whose ranks probably grow thinner by the hour. While wearing an “outfit” to a sporting event is pretty ridiculous for kids and adults alike, these guys have risen from the bleachers to create identities as the face of the fans. As such, let’s celebrate 10 of them right now, and if you see one in person, say thanks while you still have the chance. 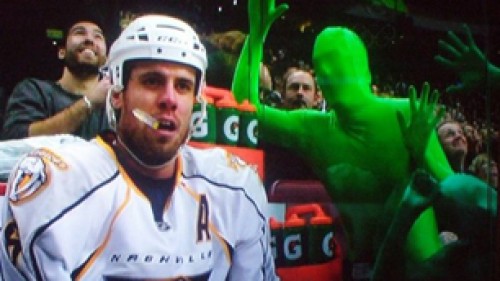 Force & Sully, a.k.a. the Green Men, are the newest members of this exclusive club. The characters are based on the popular mascot form the hit show “It’s Always Sunny in Philadelphia.” A pair of students (who remain anonymous) purchased the nylon outfits and set out to spread the Green Man legend to the Seattle Seahawks. When that didn’t work out, they had to settle for, in their own words, “the next best thing,” which turned out to be the Vancouver Canucks. Considering how the Seahawks are playing, maybe it’s for the best. At any rate, the duo ended up scoring seats next to the penalty box, and after getting in the head of Nashville Predator Dave Scatchard, they became overnight sensations. 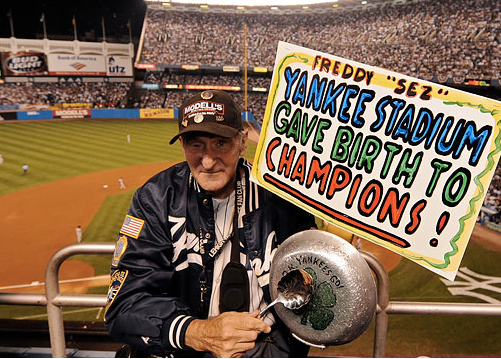 Freddy Sez lived a full life. I say that because he was actually featured in the music video for House of Pain’s “Jump Around.” I’m sure he did a lot of other great stuff too, but if I make my way into the “Jump Around” video, I’m good to meet my maker then and there. Old Freddy go a late start in the unofficial mascot game. He started around 1988 at the age of 63, and kept things going till his death this year.

He was known for carrying around both a frying pan with a shamrock on it and a bevy of signs. The signs displayed slogans that clearly seemed to be created by an old man, such literary gems as “Again & Again Yankees Prove They Are Great”, and “Fans, We Got To Help Yankees Out Of Slumps.” Rather than remain seated during games, Freddy would roam around the ballpark, sharing his goodwill with all the fans. Which sounds kind of annoying. 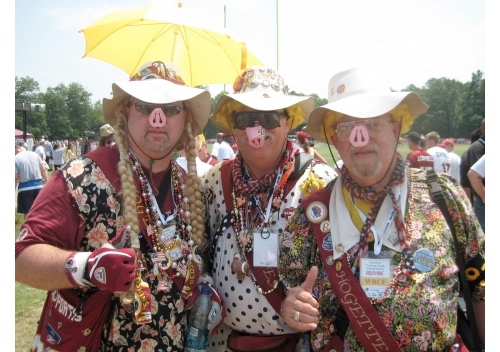 Besides laying claim to possibly the simplest website ever at www.hogettes.org, they also have a pedigree since banding together in 1983 as being very, very charitable. The group, which hovers around 12 members at any time, love their Redskins, but they seem to like charity work even more. The ridiculous costume-wearing is more than forgiven by the fact that these guys have helped raise over $100 million since their inception. In case you couldn’t tell, these guys separate themselves from other Skins fans by wearing pig noses and dresses, which would be lame and dignity-stripping, but since they raise so much money for charity, I’ll just say “Good job,” and leave them to it. 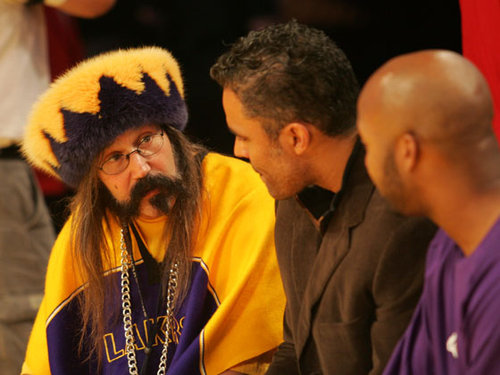 Vic the Brick is actually a radio personality who seems to have chosen to “extend his brand” by dressing up like a homeless schizophrenic at the tres chic Staples center for Lakers games. He hosts a (relatively) popular sorts radio show in LA by trade, but the many that don’t tune in have no problem recognizing him at Lakers games. “Garish” doesn’t begin to describe this guy’s sense of style.

If you think that his eccentricities only run to clothing…they don’t. He is popularly credited with two catchphrases: “Feeling You!” which is a strange battle cry, and “…out of the darkness into the light,” which a) I’m pretty sure was in the Bible, and b) is a strange thing to be known for saying often, regardless of its origin. 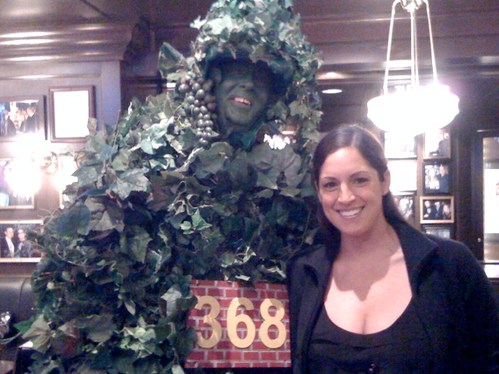 This mascot costume story perhaps makes the most sense of them all. Ward Tannhauser wore his costume as a goof during the 2003 playoffs. Reception was such from other fans that the now 48 year-old dons the costume and strolls around outside Wrigley and in Wrigleyville, masquerading as part of the outfield wall. For obvious reasons, ownership and management are not terribly excited about letting an 8.5 ft tree block the view of tens, if not hundreds of other fans, so Mr. Tannhauser has to keep his antics outside of the stadium. 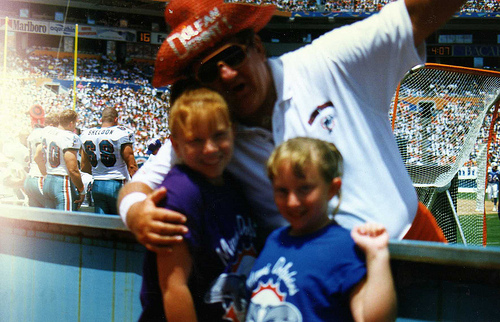 When Denny (real name: Denny Sym) passed away in 2007, he had been seven years retired, citing old age and belligerent fans as the reason. However, he had been able to put in 34 years as the face of the Dolphin faithful. Unlike many others on this list, Denny never had to graduate to the level of superfan. He started their. As soon as he got his season tickets, he immediately scored the orange and aqua hat and the monike “Dolfan Denny”, never to look back. It was clearly his calling. 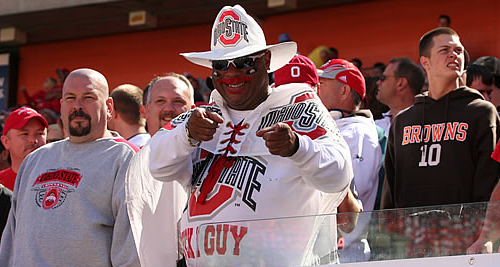 Buck-I Guy stands out from others on this list in that he has reason for notoriety beyond the world of sports. While he was a lifelong Buckeye fan, he didn’t embrace a persona until 2005, when John Chubb became famous for an altogether different reason.

While Chubb and his son were driving to from an OSU game to a Browns game the next day (nice!), they saw a car flip over and burst into flames. They each rescued a passenger moments before the car became engulfed and became local heroes. He has been a fixture at OSU games ever since. This guy is ENTITLED to dress like a jackass for any reason he wants. 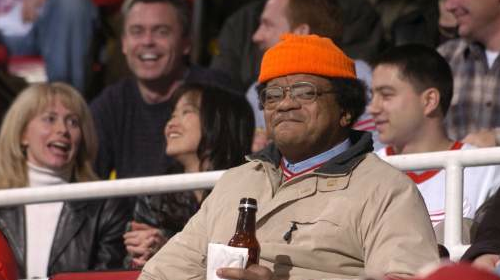 Only in the world of sports can wearing an orange hat day-in and day-out be cause for celebrity. Believe it or not, “Orange Hat Guy” is actually not his Christian name. Born Kenneth Rucker, Orange Hat Guy had actually been a season ticket holder since 1972, but understandably, didn’t achieve much recognition until he started to wear a neon orange ski cap to every game six years later. Yup. Neon orange anything usually does it. 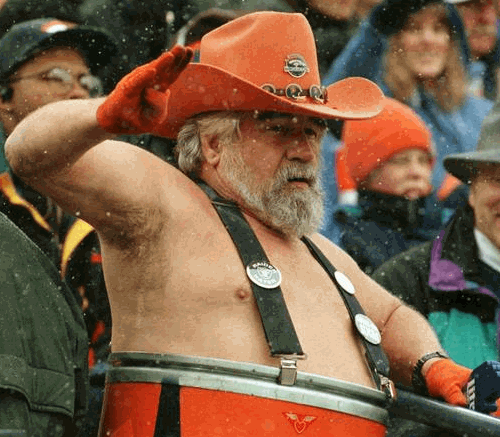 I love the simplicity of these nicknames. Guy has a big barrel around his body? “Barrel Man.” Easy. Rarely do we get to learn their proper names until it’s too late. In the event of Barrel Man, his name was Tim McKernan and he had been the unofficial face of the Broncos sine I was watching NFL film videotapes in the late 80’s. His days ruling the roost of Mile High/Invesco have come to an end since his death in 2009, though he had formerly “retired” in 2007. He was probably tired of being cold. Barrels have little insulation. 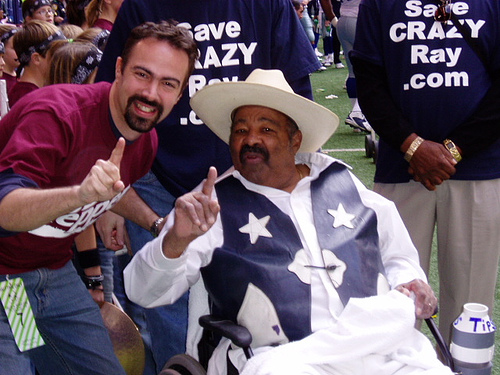 Crazy Ray wasn’t all that crazy, unfortunately. Yeah, Wilfred Jones was a black dude that dressed like a cowboy at every game at crappy Texas Stadium, which shows devotion, but that all comes from somewhere. He started off about a million years ago selling pennants to fans and became endeared to the Cowboy pageantry. The biggest tragedy about his passing was the fact that he never got to set foot inside the Death Star that the Cowboys now call home. But on the upside, he did get to miss this season. It’s a wash.