Man Arrested After Posting Video Of Himself Speeding On YouTube (Video) 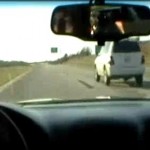 As our Christmas gift to all of you we offer you the following advice: If you are going to drive at excessive speeds on any road or highway, you may not want to post it on YouTube.  Thirty-year-old Cody Replogle of Oklahoma did just that and now he is facing two counts of reckless driving.

Attempting to sell his Corvette on eBay, Cody provided a link to a video which he claims is footage of him reaching speeds of over 195 mph in fifth gear, according to the YouTube description.  He had been trying to sell his Corvette for $26,000, but after someone saw the video (which you can view below), they immediately informed the police, who tracked down Replogle and got him to confess.

Cody did not receive any bids over $15,000, but with some substantial court fees expected to come, hopefully he took the money, because he certainly wont be needing his car anytime soon.

Hat Tip – [From The Marbles]