5. Dutch Models Paid to Cheer at the World Cup 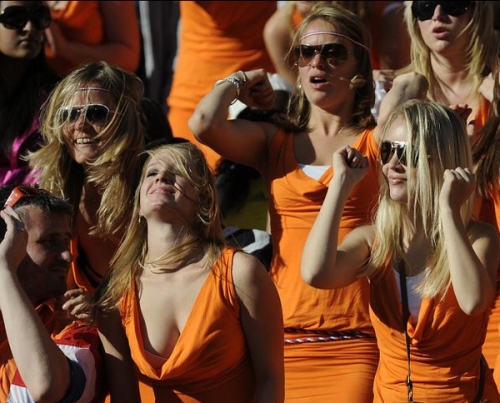 Ok. So it turned out that these women weren’t actually die hard Clockwork Orange fans, but rather models paid to turn up and cheer and occasionally rally their talents behind various products. I don’t feel slighted in the least. If my choice is between seeing the hot models in tight orange shirts and not seeing the models in tight orange shirts, I’m gonna pick the former. Sadly, they were eventually banned from the World Cup stadium for violating some sort of policy that banned awesome hot girls from being awesome and hot at World Cup games. DAMN YOU, FIFA!

It’s a national crisis that this type of thing doesn’t happen at least once per hockey game. Women have breasts, and hockey arenas have glass walls. When both meet, there should be breasts on the glass. Kudos to this young woman for returning sanity to our wayward nation(s). Also, would it kill the NHL to cram the penalty boxes full of strippers when they aren’t being used to disciplinary reasons?

Now this girl might not be among the hottest just because she allowed her boob to be grabbed while being filmed. That might actually be kind of un-hot. But it’s pretty funny that the guy’s idea of celebrating is just grabbing a handful of the girl next to him. The fact that she doesn’t object exponentially increases the comedy. I wouldn’t be surprised to find that this becomes a de rigueur celebration technique throughout Philly, replacing the time-honored tradition of punching children in the kidneys.

She wasn’t terribly outspoken during the 2009-2010 season, but she was there. And hot as hell. And since the Rose Bowl was played in 2010, she qualifies. Here’s a decent rule of thumb – if your name is Colt McCoy and you’re the QB for the Texas Longhorns, you’re supposed to have the hottest girlfriend in the history of mankind. The Colt abides. And for the record, her name is Rachel Glandorf. So her name’s not that hot, but whatever. 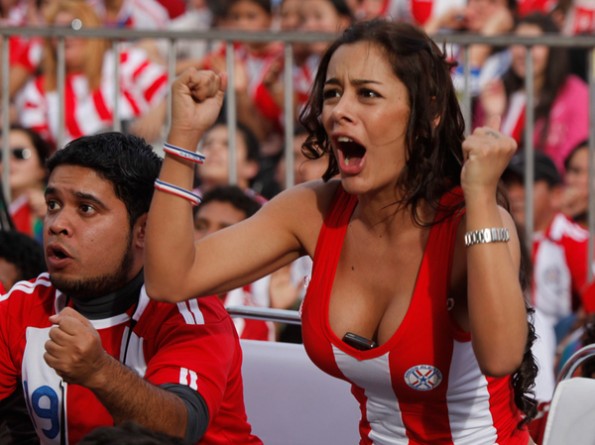 Yeah, yeah, yeah. She’s already on the list once for promising to get naked. So what? Look at this awesome picture and tell me it doesn’t belong at number one? Good bless Paraguay!