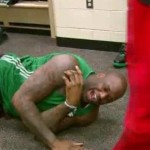 After fouling out in less than 13 minutes during a Christmas Day loss to the Orlando Magic, Shaquille O’Neal was not the slightest bit pleased with the quality of officiating.  And during a post-game interview, the Boston Celtics’ center referred to the referees as “control freaks.”  Doesn’t sounds like much, but it was enough to earn the lovable big man a $35,000 fine from the league.

And if you thought that dent in Shaq’s rather deep pockets would be enough to put a damper on his holiday cheer, think again.  Here is a look his reaction after finding out about the $35k league imposed fine.