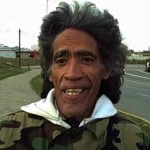 I have a God given gift of voice.  I’m an ex-radio announcer who has fallen on hard times.  Please! Any help will be greatly appreciated .  Thank you and God bless.  Happy Holidays.

The Dispatch employee decided to put this sign to the test, driving up to the man and asking him to earn his dollar by saying something with his great radio voice.  Needless to say, the homeless man delivered just that.  In fact, the Dispatch worker became so impressed that he felt the need to pull over and find out more about this mystery man.

As it turns out, the man’s name is Ted Williams.  He has worked in radio before, but alcohol and drugs took over his life and left him without a job or a roof over his head.  He is now two years clean and trying hard to get back into it, and it appears as though this YouTube video, which has gone viral over the past 48 hours, was just the break he needed.

According to several reports, offers have been coming in bunches for Williams’ voice, including one from the Cleveland Cavaliers, who have not only offered him a full-time job, but are also willing to give him a house he can call his own.  He has also received a $10,000 offer for his voice from the Ohio Credit Union League.

This is one of those stories that you simply can’t help but smile and feel good about.  Williams has clearly made some mistakes in the past, but he has also been humble enough to admit that much and take responsibility for his actions.  It is not an easy task to turn things around after years of homelessness,  but all Ted was asking for was a little help and a big break.  His “golden voice” would do the rest.

Here is a look at the video that gave Ted Williams the big break he needed.  I wonder how Tucker Carlson feels about this second-chance story?