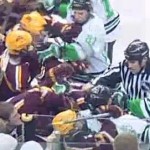 Bench-clearing brawls can spark some of the most violent incidents in sports, but during Friday night’s bench-clearing brawl between the Minnesota Gophers and the North Dakota Fighting Sioux, the only thing violent was the clean check that led to the entire incident.

Just before the buzzer sounded to end the second period, Sioux forward Brad Malone drilled Gophers defenseman Kevin Wehrs into the end boards, sending his helmet flying and his teammates to the rescue.  The pushing, shoving, jersey grabbing, head-locking and face-washing ensued between both teams in front of the benches before order was finally restored.  When it was all said and done, 24 minutes in penalties and zero punches were dished out, making this one of the strangest bench-clearing brawls ever.

So, do you see any punches thrown?  Because I sure as hell didn’t.