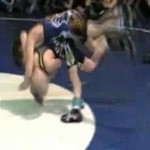 Some might think that the mohawk on Stevo Poulin’s head is there to intimidate his opponents.  I would argue that this 8-year-old wrestling phenom could be wearing curling rolls and a hairnet on his head and the rest of the kids would still be frightened by his presence on the mat.

Apparently, Stevo has compiled a 256-26 lifetime record.  Just look at him manhandle the opposition, tossing the other kids around like he’s their daddy.  Kind of makes me wonder who those 26 losses came against.